The special voting exercise held on Thursday 1 December ahead of the main December 7 presidential and parliamentary election has ended with many voters not getting the chance to vote.

This was as a result of the omission some names at almost all of the 275 designated polling centres across the country.

A mix of officers of the security agencies, officials of the EC and media personnel totalling 127,394 were expected to take part in the early voting so as to go about their duties on December 7, the main election day.

But as it turned out many were disenfranchised and some did not take kindly to the development.

At the designated polling station for the Tema West constituency in the Greater Accra Region, three who turned up only to find out that their names were not on the list vent their spleen on the EC officials present by verbally assaulting them.

At other polling stations, some of the incensed voters attempted to stop EC ooficials from continuing with the election leading to reported skirmishes.

The EC, in a statement, however, urged the affected people to remain calm as they addressed the challenges to make sure they were not disenfranchised. 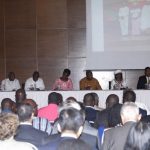