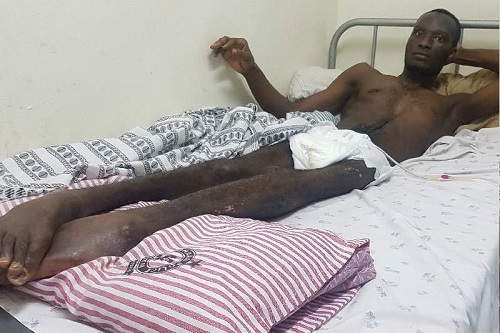 The Communications Director of the Youth for Human Rights Africa (YoHRA), Christopher Selorm Ankou has revealed the decision by the organization to sue the government at the International Court of Justice (ICJ) over the recklessness of the police which has left one Stephen Arthur paralyzed.
Stephen Arthur who was mistakenly shot by a police officer is currently struggling with his health after the state abandoned.

YoHRA has cautioned it will soon issue a writ against the government at the local, regional and international human rights courts to protect the life of Stephen.

Narrating the incident, Stephen Arthur said on January 4, 2011, he was travelling from Boduasi to Kasoa in the back seat of a private car and the driver was stopped by a police officer at Boduasi barrier to demand his New Year ‘gift’ for which the driver gave the officer GHS10.

Whiles the conversation was ongoing between the two, another officer at post came around to also demand same but the driver was reluctant and was asked to drive away by the officer who had received his ‘gift’.

The misunderstanding between the driver and the second police officer resulted in a gun shot that hit Stephen Arthur.
Stephen was sent to the Korle Bu Teaching Hospital where he was admitted for a while and asked to go home because he could no longer afford the bills.
He was subsequently admitted to the police hospital when his health was fast deteriorating and his family drew the attention of the police through a letter to the headquarters.
Speaking on the Gold Power Drive with Nana Darkwa Gyasi, Christopher Selorm Ankou said the reluctance of the Ghana police service and the state to prosecute the police officer who clearly was engaged in an act of corruption and the neglect of Stephen for the past 6 years was in breach of his Human Right.

“Stephen has been abandoned by the police and state and is currently at the police Hospital and not being attended to on regular basis at the hospital. All promises made to him by the police and the state have still not been fulfill.”
“Chapter Five of the 1992 constitution of the Republic of Ghana guarantees Stephen’s Security, Health, Life and dignity as a Human being. We as a Human Rights Organization think that the continuous breach of these inalienable rights is unacceptable and we must all help the poor victim access his right through every rightful and legal means. We are going to take to government on here and outside till justice is given to our brother Stephen,” he declared.
By: Osman Issah Abadoo/