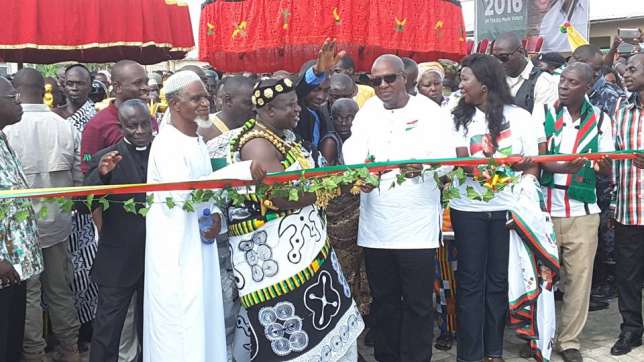 President John Dramani Mahama has commissioned the Abirem Market in New Abirem Constituency in the Eastern region.
The facility is expected to stimulate the local economy of residents in the area.

In his address, the Chief of Abirem said, in 1997 in responding to a request put before former President Jerry Rawlings,construction of the market began but unfortunately was abandoned after the NDC lost power to the New Patriotic Party in 2000.

The chief narrated how President Mahama responded kindly to a request the community put before him in connection with the market and the immediate attention he gave to their request leading to the completion of the beautiful edifice he commissioned today.
President Mahama told the people that apart from the government investing heavily in infrastructural projects to transform the lives of the people, it was also investing heavily to improve the livelihoods of the people and economic activities.

He said, “That is the issue when it comes to changing government. Projects get stalled. Thankfully, we have managed to complete this. Markets stimulate the country’s economy and circulate money in the local economy.”

“The thing is that most markets are not engineered. You see individuals start with a small table then others join in later then a market is developed. In such cases, electricity connection is done on small basis, on several occasions not done well, resulting in fire outbreaks,” he added.

“Our government has begun the redevelopment of markets, the Kotokuraba one, Aboabo, Kejetia, I have promised the Mankessim people that in my next term they shall have one.”
The market has modern facilities and expanded to accommodate more traders in Abirem and beyond.

The market has 70 lockable stores,over 290 ordinary stores. A special car park is provided to facilitate movement of goods into the market and it’s placed under the control of GPRTU.