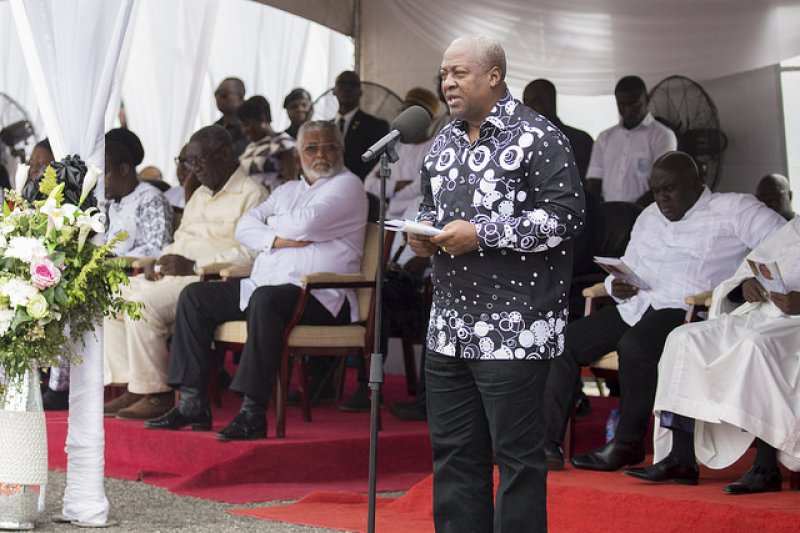 A youth group linked to the National Democratic Congress (NDC), the Krobo Youth for Mahama, has pledged its unflinching support for President Mahama and has vow to work hard to ensure a second term victory for the president in the December polls.

Speaking at the group leaders’ conference held at the Oklemekuku Community Center at Odumase Kroboon Saturday, the Convener of the Group, Francis Amanor, a former TEIN Executive of the Koforidua Polytechnic said, “our group includes young men and women who share in the vision of the NDC and its 2016 agenda 50-50 in the Eastern Region. We are gathered here today in response to the call by thousands of our youth in the Krobo constituencies to once again demonstrate our appreciation to the NDC for all that it has done for our Communities. The NDC has proven has over the years that it is the party for the nation, not for a few, through infrastructural development, improved health care delivery, improved security, numerous social interventions in our Communities, and throughout the country.”

“Our objective is to ensure that his Excellency John Dramani Mahama secures an overwhelming victory come December 7, 2016 and to ensure the Eastern Region NDC snatches eight parliamentary seats from the NPP to add to the seven the party currently has. The seats we will work hard for the NDC to snatch from the NPP include Asuogyaman, Ayensuano, Abetifi, Fanteakwa North, Abirim, Suhum, AkimOda and Ofoase-Ayirebi.As a group, we will reach out to all the communities across the Krobo constituencies to ensure an effective mobilization of the youth and first time voters. We will educate them on matters relating to the elections and promote our presidential and parliamentary candidates. It’s our belief that when the parliamentary candidates do well in the polls, it will provide a shine for our flag-bearer’s victory” he said.

The Chief Executive of the Lower Manya Municipal Assembly, Francis Acolatse, who chaired the function urged the youth to work hard to garner lots of votes for the President and the NDC parliamentary candidates in all the Krobo Constituencies. I urge you to extend your influence to all Krobo speaking people in every part of the Eastern Region. We need all of them to come out in their numbers to show their love for President Mahama by voting massively for hm.”

An Adviser to the Krobo Youth for Mahama, Owula Mangortey went through the NDC Green book and highlighted the many infrastructuraldevelopments and social Interventions of the government. He said, if Nana Oye Lithur is to speak of the impact of the social intervention programs in the rural and urban poor communities that will get the electorates expressing gratitude to President Mahama by way of massive votes in the December elections.”

”As we work hard to navigate phase two of the Transformational Agenda with Mahama as our leader and president, we are convinced that more initiatives and development projects shall be rolled out. John Mahama is post-independence-born president and he gives us hope and confidence. Having risen through the ranks as a member of parliament for 12 years, a deputy Minister/Minister of communication for four years, and Vice president for three and half years, and a President, it is only natural that the good people of Ghana give Mahama the opportunity to serve his second term. President Rawlings had 8 years to complete his agenda. President Kufuor had 8 years. President Mahama deserves 6 years to leave us a legacy and a great heritage, I am urging you to work hard to ensure total and uncontestable victory for President Mahama” Owula Mangortey told the youth