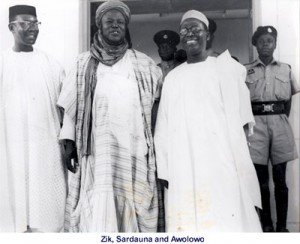 TIME passes so swiftly. On Friday January 15, it will be fifty years that the Military took over power or were handed over power—depending on one’s interpretation— in this country. During the encounter there were casualties on that day. I am aware that the children,friends,grandchildren and supporters of those who were killed in the encounter, are making arrangements to mourn the fiftieth anniversary of the demise of their loved ones. I am aware that Kole,Gbenga and Solape, all children of Brigadier Samuel Ademulegun are making preparations to remember their late father. Likewise the children and grandchildren of late Chief Okotie-Eboh are equally making arrangements in Warri to remember their Dad and grandfather. Same goes for the children and grandchildren of late S.L. Akintola who will remember him in Ogbomoso.

There is an ongoing debate whether the Military took over power or were handed over power by the President of the Senate, Dr. Nwafor Orizu, who later became Acting President in place of Dr. Nnamdi Azikiwe. Only five Ministers are still alive to tell the story of what really happened on that day, January 15, 1966. And they are AlhajiYusuf MaitamaSule (86), Chief Richard Osuolale AbimbolaAkinjide (84), Alhaji Shettima Alli Mongunu (89), no relation to the present Security Adviser, Major General Baba Gana Mongunu(rtd.), Alhaji Abdul Ganiyu Folorunso Razak (88) and Alhaji Shehu Usman Aliyu Shagari (91). The sixth Minister, Alhaji Inua Wada who died recently in Kano. He was an uncle to the former Head of State, Late General Murtala Mohammed(1938-1976). Alhaji Shehu Shagari who later became President (1979-1983) is still insisting even till today that the Military took over under duress. In his book,” BECKONED TO SERVE” he wrote that “ I was about to break the Ramadan fast on Sunday 16th January, when all ministers were asked to report to the Cabinet Office at 6.30pm. The whole premises were surrounded by soldiers in battle order that some of us initially hesitated to enter. In the Cabinet chamber were Major General Ironsi, Bukar Dipcharima and Ibrahim Tako Galadima. There were no officials present. Major General Ironsi admitted to us that he had been unable to suppress the rebellion, which he said was getting out of hand. He stated that the mutineers were in control of Kaduna, Kano and Ibadan, and had killed two regional premiers, Sir Ahmadu Bello and Chief Akintola. They had also murdered a number of his best officers, including Brigadiers Maimalari and Samuel Adesujo Ademulegun, the Commander 1st Brigade Headquarters in Kaduna. Ironsi was full of emotion and even shed some tears. When we asked him about the whereabouts of Sir Abubakar and Chief Okotie-Eboh, he said he still did not know but averred efforts were being made to locate them. At this stage Kingsley Ozumba Mbadiwe (1917-1990) broke down and kept crying:” Please where is the Prime Minister?” When we reminded Major-General Ironsi if he needed to avail himself of the British privilege of assistance, he replied it was too late as the army was pressing him to assume power. Indeed, he confessed his personal reluctance to take over because of his ignorance of government; but insisted the boys were adamant and anxiously waiting outside. He advised it would be in our interest, and that of the country, to temporarily cede power to him to avert disaster. Accordingly, we acceded to his request since we had no better alternative. Ironsi then insisted that the understanding be written.

Surprisingly, there was no stationery to write the agreement; and all the office were locked while no official was around. Alhaji AGF Abdulrazaq, the Minister of State for the Railways (former NPC legal adviser), managed to secure a scrap paper on which he drafted a statement, which we endorsed. That was the so called voluntary hand-over of power by the Balewa Government to Major General Ironsi!
It was agreed that the statement would be typed and Dipcharima would sign it on our behalf. We were then asked to return home and await further instructions. I only got to break my Ramadan fast around 9.30pm”.

In taking over power on January 16, 1966, the then Head of State, General Ironsi made the following broadcast to the country: ” The Military Government of the Federal Republic of Nigeria wishes to state that it has taken over the interim administration of the Federal Republic of Nigeria following the invitation of the Council of Ministers of the last Government for the Army to do so.

For some time now there have been escalating political disturbances in parts of Nigeria with increasing loss of faith between political parties, and between political leaders themselves. This crisis of confidence reached a head during the elections in the Western Region in October last year. There were charges by the opposition parties rigging of the elections and general abuse of power by the regional government in the conduct of the elections. Riots, arson, murder and looting became widespread in Western Nigeria since October. The situation deteriorated and certain army officers attempted to seize power.

In the early hours of the morning of 15 January 1966, these officers kidnapped the Prime Minister and the Minister of Finance and took them to an unknown destination. The revolt was widespread throughout the country and two Regional Premiers and some high-ranking army officers were killed.

The whereabouts of the Prime Minister is still unknown. The vast majority of the Nigerian Army under the command of the General Officer Commanding the Nigeria Army remained completely loyal to the Federal Government and immediately took steps to control the situation.

The Council of Ministers of the Federal Government met and appraised the problems confronting the government. They appreciated the immediate need to control the serious situation which threatened the Federation. They also saw quite clearly a possible deterioration of the situation in the light of developments on Saturday, 15 January 1966. On Sunday, 16 January, the Council of Ministers unanimously decided to hand over voluntarily the administration of the country, with immediate effect, to the Nigerian Army. This was formally done the same day by the Acting President of the Federation. The Government of the Federation of Nigeria having ceased to function, the Nigeria Armed Forces have been invited to form an interim Military Government for the purpose of maintaining law and order and of maintaining essential services.

The invitation has been accepted and I, GENERAL JOHNSON THOMAS UMUNAKWE AGUIYI-IRONSI, the General Officer Commanding the Nigerian Army, have been formally invested with authority as Head of the Federal Military Government and Supreme Commander of the Nigerian Armed Forces”.

In his own words, Chief Richard Akinjide said the Ministers did not hand over to Ironsi. In 2000,he said” under the law,that is, the interpretation Act, as acting President, NwazorOrizu had all the powers of the President. The GOC said he wanted to see all the cabinet ministers. And so we assembled at the cabinet office. Well, I have read in many books saying that we handed over to the military. We did not hand-over.

Ironsi told us that” you either hand over as gentlemen or you hand-over by force”. Those were his words. Is that voluntary hand-over? So we did not hand over. We wanted an Acting Prime Minister to be in place but Ironsi forced us, and I use the word advisedly, to handover to him. He was controlling the soldiers. The acting President, NwaforOrizu, who did not cooperate with us, cooperated with the GOC. Dr. Orizu and the GOC prepared speeches which NwaforOrizu broadcast handing over the government of the country to the army. I here state again categorically as a member of that cabinet that we did not hand-over voluntarily. It was a coup”.

A lot has happened to our country since then and a lot will still happen. As we enter the New Year, it is my hope and prayer that the best years of Nigeria, are still to come.

*Mr. Teniola, a former director at the presidency, wrote from Lagos.