A private legal practitioner Ace Anan Ankomah is of the view that President John Mahama breached the constitution by refusing to seek parliamentary approval before agreeing to host the two ex-Guantanamo Bay detainees.

President John Mahama has explained that he did not consult Parliament because the agreement between Ghana and the United States was based on issues of security and not an international treaty and therefore, did not require Parliamentary approval.

“This is a matter of security, it is not an international treaty and so, it is not something that we were required to take to Parliament and that’s why it didn’t go to Parliament,” the President explained.

But the lawyer on his Facebook wall, disagreed with the President’s argument, saying his explanation sought to suggest that “a government can simply bypass article 75 by not reducing such agreement into writing, and then there would be no need for the mandatory parliamentary ratification.”

In his view, the President appears to argue that once there is no treaty or formal “agreement”, there is nothing to seek and obtain parliamentary ratification for.

That argument according to Ace Ankomah, suggests that a government can simply by-pass article 75 by not reducing such agreements into writing, and then there would be no need for the mandatory parliamentary ratification.

But he disagrees, saying, “all treaties, agreements and conventions” entered into/executed by the President (ostensibly on Ghana’s behalf) will require parliamentary ratification before they will have binding effect on Ghana.

“There may not be a treaty, but there is an agreement, whether or not it is in writing,” he added.

Mr Ankomah cited another case to back his argument; “Atuguba JSC in Amidu v. Kufuor, that the President has the prerogative to enter into such agreements/treaties.”

He said however that, any such agreement or treaty is subject to parliamentary ratification.

“Thus for these purposes agreement covers every contract, transaction, arrangement, pact, deal, undertaking or understanding entered into by the President on behalf of Ghana with another country or international body, whether in writing or verbal. A president cannot escape the conditions of article 75.” 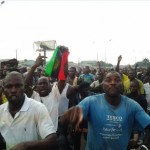