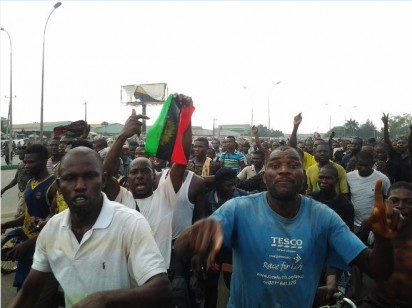 The Rivers State Police Command has said that it has arraigned 10 suspected pro-Biafra protesters arrested between Saturday and Monday.

The suspects were arraigned on Wednesday at Magistrate Courts 7 and 14 in Port Harcourt on two count charges of criminal conspiracy and treasonable felony, a statement by the Rivers State police spokesperson, Ahmad Muhammad, said.

The statement said one hearing was adjourned till Thursday, and another till next week Thursday.

The presiding magistrates ordered for the suspects to be remanded in prison custody.

“It would be recalled that the suspects were arrested while on their way to infiltrate Port Harcourt from neighbouring states with the intent to engage in a conduct likely to undermine public peace,” the statement said.

“The command wishes to further re-emphasize that it will not stand idly and allow any person or group of persons to violate the laws of country by engaging in conducts that are perilous to public peace and order as well as the lives and properties of other law abiding citizens, please.”

The suspects were arraigned in Port Harcourt just as a court in Abuja, today, remanded the leader of the Indigenous People of Biafra, IPOB, Nnamdi Kanu in Kuje prison, Abuja.