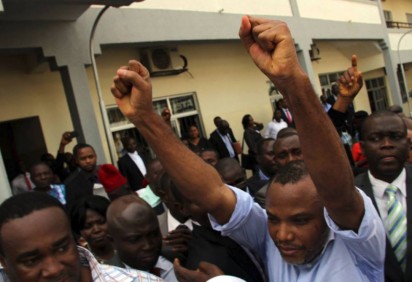 ONITSHA—A human rights group, International Society for Civil Liberties and the rule of Law, Intersociety has said that it is far better for the detained leader of Indigenous People of Biafra, IPOB, Nnamdi Kanu to be kept in the prison custody than to remain in the captivity of the Department of State Services, DSS.

Intersociety said the period Kanu stayed in the DSS captivity was wasteful, tortuous and depravity, more so when the DSS confirmed during last Wednesday   trial in the court that it had concluded its investigations about Kanu’s ‘offences’.

Meanwhile, the society has decried what it termed as murder of 50 in violent suppression of non-violent Biafran protesters by Nigeria’s security forces between August 30, 2015 and January 18, 2016.

According to the group,” the  documented statistics available at its disposal clearly indicated that such a massive application of state violence outside local and international norms to violently suppress the pro-Biafran non-violent protests in Nigeria within the afore-mentioned period of less than five months, had led to the gruesome murder by security forces of such a number of Nigerian citizens and Biafran citizens in particular.  “

The statement also alleged that scores of innocent citizens have also disappeared in the hands of Nigerian security forces particularly the Nigerian Army and the Nigeria Police Force. Citizens are routinely arrested by police on allegation of being “MASSOB or IPOB members” and killed secretly and buried in undisclosed shallow graves; likewise those shot and killed by soldiers and police while embarking on peaceful protests. Once their bodies are taken away by their killer security operatives, they will never be accounted for or released to their families for befitting

“Those gravely shot and wounded in Delta State are: Chinedu Abe, Onovo Michael, Kingsley Anuife, Amechi Ojieh, Ogbonna Kanayo, David Ogbu, Charles Chukwuka, Elochukwu Uzor, Chinedu Chukwuma and Onyekanna Ifechukwude. Those critically shot and injured on 30th  August 2015 in Anambra State are: Sampson Kalu, Chidiebere Nnaji Onyekwelu Ovute, Felix Ndianaefo, Ikechukwu Okafor, Chimaobi Okafor, Christopher Oforah, Sunday Nwazugbo, Stanley Eze, Mrs. Eucharia   and Mrs. Patricia. Two of the four citizens killed in Awka and Onitsha in the same peaceful protest of 30th  August 2015 were Ebuka Nnolum from Enuguabo-Ufuma in Anambra State and Obasi Maduka from Oshiri in Ebonyi State (his brother’s number is. In the 2nd  and 17thDecember 2015 peaceful protests in Onitsha, over 30 citizens were critically shot and injured, out of whom, 27 citizens were taken and admitted at the Multicare Hospital”.

“Between 300 and 400 citizens or more labeled “Biafran or IPOB or MASSOB members” had also been arrested, detained, tortured, or killed extra judicially across the country since 30th  of August 2015. In the Aba pro Biafran peaceful protest of 18thJanuary 2016 alone, 60 peaceful protesters were arrested and detained. Many are still languishing in pretrial detention; others are facing concocted heinous political crimes charges such as  treason and treasonable felony”.

On why Buhari Must Heed EU’s advice, the group stated that   in the world over, violent suppression of non-violent protests by territorial governments have always boomeranged; leading the suppressed to abandon non-violent approaches and resort to self help or self defense approaches including   Most of the ongoing devastating intra State violent conflicts in Africa and the Middle East primarily started as non-violent socio-political or ethno-cultural campaigns, but turned violent on account of the host States’ repressive and dictatorial responses. A newest case in point is seeming resumption of  oil violence  in the Niger Delta Region of Nigeria.

“Consequently, the latest advice handed down to the Government of Muhammadu Buhari by the European Union High Representative for Foreign Affairs and Security, Ms Federica Mogherini, is a welcome development, timely and internationally grounded. The EU High Representative had advised Buhari that in as much as,  the European Union has strong diplomatic and economic ties with Nigeria, “protection of human rights and fundamental freedoms remains a priority for the EU and we encourage the authorities (Nigeria) in every occasion to respect such rights”.  The EU, on the other hand, advised pro Biafran campaigners and the Organization of Emerging African States (OEAS) “that self-determination and border changes must be in accordance with established international law.  This followed the OEAS call  for an internationally recognized referendum on Biafra independence or autonomy.  The EU further advised that “it will only recognize a Biafra born via international law and not (through) armed secession (or rebellion)”.

“The EU’s advice is totally in agreement with our public position on the same issue, to the effect that the Buhari administration must refrain from massive deployment of State violence and use of dark side of the laws of the land as well as levying of political, economic, social, ethnic and cultural wars against members of the Nigeria’s Igbo and other Southern nationalities. We had also advised the pro Biafran agitators to at all time stick to nonviolent and peaceful approaches and stay away from resorting to violence or armed rebellion. To the best of our knowledge, the agitations and their campaigners have remained nonviolent till date; as opposed to the Buhari administration which had applied and still apply maximum and dreaded State terror in handling the political self determination campaigns”.

Meantime, leader of the Movement for the Actualization of Sovereign States of Biafra, MASSOB, Solomon Chukwu has said that the proposed Biafra elections were postponed due to inadequate preparations as the date drew near.

Recall that MASSOB founder, Chief Ralph Uwazurike, had earlier scheduled elections to set up structures for the administration of the Biafran territory and appointed a catholic priest, Rev. Fr. Samuel Aniebonam, as the Chairman of the Biafran Independent Electoral Commission, B-INEC.   But Rev.Fr. Aniebonam, has reportedly disassociated himself from the appointment.

Chukwu denied reports credited to the Uchenna Madu faction of MASSOB that the elections were put off by Uwazuruike for fear of arrest by security agents over an agreement he allegedly signed   with the federal government to abandon the struggle for the actualization of an independent state of Biafra.

The MASSOB Leader who spoke through the group’s National Director Information, Sunny Okereafor, insisted that Uwazurike did not sign any deal with the federal government including its security agencies over Biafran struggle.

According to him, “Our leader, Chief Ralph Uwazurike didn’t sign any deal with the federal government or its agencies. These are lies from the pit of hell being spread by expelled members like Uchenna Madu and his faction who have continued to sabotage Biafra.   Uwazuruike was released from detention and told to go and bury his mother. After burying his mother, he reported back, they asked him to go home that he had no case to answer.   Don’t be deceived, Biafran elections were postponed indefinitely because of ill preparations, not for fear of arrest of Uwazuruike by anybody. Why would anybody arrest him?

“To tell you that Uwazurike is not afraid of arrest or detention; the last time he was invited by the Police, he went with mattress, slippers and other personal effects to the Imo state Police Command and even the Zone 9 Police headquarters at Umuahia. The Police people told him that they knew him as a non violent person that he should go home.

He insisted that MASSOB under Uwazuruike has held several activities in the last two years without being harassed or invited by security agencies and insisted that the Biafra elections which he claimed, would be held soon, won’t be an exception.

The All Progressives Congress (APC) has warned against the declaration of any result from the Anambra Central Senatorial primary election conducted  by the party.

A statement signed  by Mai Mala Buni, National Secretary of the party  stated that the  All Progressives Congress Senator, Domingo Obende who was duly appointed by the party to conduct the primaries is yet to declare a final result and  hence any other result announced from any quarter is null and void.

The party therefore urged the media and the general public to await the completion of the exercise. 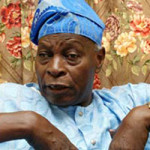