Carrying placards with different inscriptions, the protesters called on the Lagos State government to come to their rescue, contending that the harassment and extortion had been going on for a very long time.

They alleged that policemen from Panti, Trinity and other commands in the state often raid the market, demanding for huge sums of money, ranging from N200,000 to N500,000 to bail those arrested for crimes they did not commit.

The traders said extortion stopped at a time the late Iyaloja of Lagos, Abibatu Mogaji, intervened, lamenting that soon after her death, the policemen resumed their act.

They alleged that last Monday, policemen from Panti suddenly stormed the market and arrested some of the traders without giving any reason for their action.

One of the traders, who pleaded anonymity, said the policemen came to his shop and those of four others, arrested them, and that after persistent efforts to know why they were being arrested, they were told they stole the brain box of a car.

He said the policemen rebuffed explanations that traders at the market dealt only in marine parts and not auto spare parts.

He alleged that the five traders were made to part with N160,000 before they were set free, while those who could not pay were still being held at Panti Police Station.

The trader said that after the Monday incident, the policemen again came on Wednesday evening to arrest more of his colleagues and made more arrests yesterday.

He said: “The police from Trinity Area ‘B’ has been raiding our market and whenever they see anything with anybody, they will detain the person and ask him or her to pay certain amount before releasing him or her.

“We want them to stop harassing us and our customers. We do not sell stolen goods; our customers are now running away from us.”

The trader, who spoke on behalf of other traders, further called on Governor Akinwunmi Ambode to come to their aid, saying the activities of the policemen were becoming unbearable for them.

He said traders were now afraid to open their shops because of the activities of the police.

Another protester, Samuel Dikko, who noted that the market was registered, said they want the police to tell them their offences.

He said: “We have a union and if anybody commits an offence, the police is supposed to inform our leaders before making any arrest at all. How can they just come all the way from Yaba to arrest traders? What is the motive behind it?”

Others said the police brought an invitation letter to the market leader on Wednesday evening, dated January18, 2016, without checking the date on the letter.

A copy of the letter, which is in possession of Vanguard, showed the policemen raided the market the same day the letter was dated.

Reacting, Lagos State Police Public Relations Officer, Mrs. Dolapo Badmus, said the traders did not need to protest, and that they should have just channelled their grievances in writing to the Police Commissioner.

She, however, assured that the matter would be investigated. 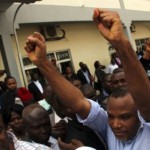