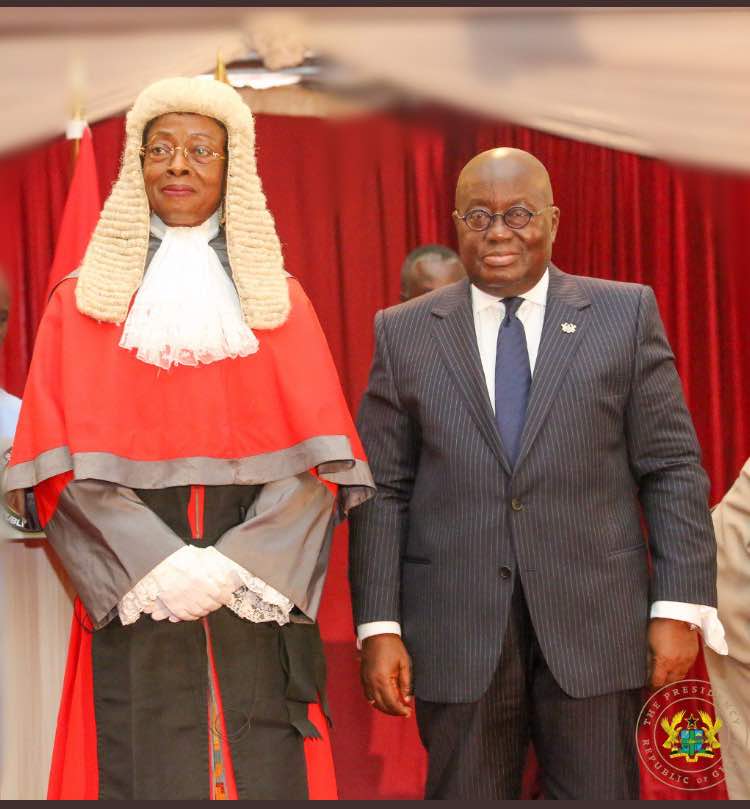 According to President Akufo-Addo, the new Chief Justice “will bring honour to the Judiciary and to our country”, adding that “in her, we have a worthy successor to Chief Justice Wood and the others who have gone before her.”

President Akufo-Addo made this known on Monday, June 19, 2017, when he swore into office Justice Sophia Akuffo as the new Chief Justice of the Republic.

Outlining her qualities, “hard work, discipline, capacity for detailed research, intimate knowledge of the law, independence of mind and spirit, honesty and integrity, deep-seated respect for the rule of law and for the best traditions of the legal profession, abiding belief in the sovereignty of Almighty God”, the President stated that these will serve her well in her new office.

These characteristics, the President noted, have sustained Chief Justice Sophia Akuffo’s brilliant career as a lawyer, and which propelled her to the notice of the 1st President of the 4th Republic, His Excellency Jerry John Rawlings, who appointed her to the Supreme Court on 30th November, 1995, some 22 years ago.

Since then, President Akufo-Addo stressed that Justice Sophia Akuffo “has been one of the leading lights of the Court, and her contribution to the Court’s work and the growth of our nation’s jurisprudence has been extensive.”

He continued, “She has justified the confidence reposed in her by President Rawlings. She has now to justify the confidence I am reposing in her as Chief Justice.”

President Akufo-Addo was certain that the new Chief Justice will continue with Chief Justice Wood’s agenda, i.e. redeeming the image of the Judiciary and strengthening its accountability, proceeding with the modernisation of judicial activities, and establishing more specialist courts to improve the quality of judicial administration.

“These should be the hallmarks of her tenure as Chief Justice. I assure her of the full co-operation of my government as a genuine and trusted partner so that, together, the Executive and the Judiciary can co-operate in a spirit of mutual respect to realise the welfare and progress of our people,” he said.

The President thanked the leadership and members of Parliament for the expeditious manner in which the parliamentary process of approval was handled in her case.

President Akufo-Addo also extended his appreciation to Justice William Atuguba for holding the fort, as Acting Chief Justice, during the period of the retirement of Chief Justice Georgina Wood and the swearing into office, on Monday, of Chief Justice Sophia Akuffo.

“I observed that, during the vetting process of Justice Sophia Akuffo in Parliament, on Friday, June 16, he, together with other members of the Supreme Court, were present in Parliament to lend their support to her nomination. This was a highly commendable gesture,” he added.

The President was hopeful that this same level of support will be extended to Chief Justice Sophia Akuffo, as she assumes the mantle of head of the Judiciary.

“To her colleagues on the Bench and to members of the Bar, I urge your continued solidarity and co-operation with the new Chief Justice to promote the rule of law. That will be in line with the finest traditions of the Bench and the Bar, and will help advance the welfare of our people,” he added.

We never said John Mahama should be replaced – Botchwey C’ttee
FULL TEXT: Akufo-Addo’s speech at CJ swearing in
To Top