The Editor-in-Chief of the New Crusading Guide, Abdul Malik Kweku Baako, has cautioned the state not to rush into passing any law that permits the private use of marijuana.

He said despite calls by some prominent persons including former UN secretary-general Kofi Annan for the legislation of cannabis and other drugs, the country should examine its circumstances before making such a move.

Speaking on Joy FM’s Newsfile, a news and current affairs programme on Saturday February 27, 2016, Mr Baako asked: “Do we have the capacity? This is virtually an uncharted territory. We may pass the legislation; that I am sure will not be difficult. We have so many people who think so well in this country.”

He, however, expressed doubts about the country’s ability to enforce the law on the controlled use of marijuana, given its history of weak law enforcement. “It is only when it comes to the acting that we have difficulties, the implementation, the enforcement.

“So, as for the legislation, I suspect we have capable people in the country, who can put their minds together and put out there a certain beautiful legislation. The question then will be the capacity to enforce, to manage, to control, and to command. Can we?”

Mr Baako, who has confessed to using the narcotic sometime in his teens, said he will “hesitate to endorse legislation”, despite insisting he is receptive to a debate on the matter, as, out of the debate “will come the ideas as to how to move forward”.

Mr Baako, though, urged caution: “But, the timing, we should hasten slowly relative to this matter,” explaining that children, for example, who have a bent for adventure may abuse the drug and slip out of control.

“In our days, there wasn’t much ICT and all those things, so perhaps we were OK, we were lucky,” he added. 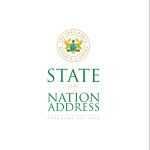