The Minority Spokesperson on Communications, Alhaji A.B.A Fuseini, has served notice that the opposition National Democratic Congress (NDC) will legally hold vice president Dr. Mahamudu Bawumia responsible for supervising over the “looting of state funds” in the award and implementation of the national digital addressing system contract if it returns to power.

The location-based system designed by Vokacom, a Ghanaian Information Technology firm, cost $2.5 million and is expected to be a precursor to the National Identification Authority’s Ghana card.

“…The thing is under his aegis. He more or less superintended the whole enterprise that’s why he is livid because he is being exposed and a vice president superintending over scandalous transaction such as this, clearly it doesn’t bother well for his office,” he emphasized.

Dr. Bawumia has dominated the news recently for his scathing attack on former president John Mahama for describing the addressing system as ‘419’.

“It is such a pity,” said Mahama whilst addressing supporters of the NDC after the party’s latest Unity Walk in Cape Coast.

“For former president Mahama to claim that Ghana’s NDPAS and the accompanying GhanaPostGPS app is a 419 scam demonstrates a complete lack of understanding of the system,” said Dr. Bawumia. 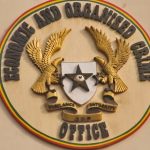