Ghanaians who have overstayed their visas in the United States of America must be concerned because the new Trump administration will ask them to “depart”, U.S. Ambassador to Ghana, Robert P. Jackson has told Atiewin Mbillah-Lawson in an exclusive interview minutes after Mr Donald Trump emerged winner of the U.S. election on Wednesday, 9 November.

“One thing that I do think that Ghanaians need to be aware of is, I think the president-elect, as I mentioned, is likely to be more rigid about illegal immigration. We have a lot of Ghanaians who have overstayed their visas in the U.S. and I think that they need to be concerned about whether they would be allowed to remain illegally. My guess is they will be given some options but the president will be serious about asking those who’ve violated their visa status to depart,” Mr Jackson said.

Atiewin Mbillah-Lawson: So that means we would be expecting more Ghanaians to be potentially deported into the country from the U.S.?

Ambassador Jackson: I think that’s already underway in the Obama administration. I think it’s likely to accelerate under a Trump administration, but apart from that I do not expect major changes in our policy and whatever government emerges here after the elections on December 7 will have a friend in the U.S. and I’m confident will be a friend of the U.S.

Mr Jackson also said the Trump administration would not paint every African country with the same brush. “Ghana’s economy is growing, Nigeria’s is shrinking. We have a very different relationship with Ghana. Ghana is more supportive of free trade and shares a long history of peaceful existence which Nigeria does not have, so I think we need to be cautious,” he added.

Just last week, the U.S. deported 108 Africans, 54 of them being Ghanaians. There were some 50 Liberians among the deportees as well. They refused to disembark from the plane that transported them to Accra describing as inhumane the treatment meted out to them by U.S. authorities.

They claimed the U.S. officials were being hypocritical in their deportation as they were not treated with dignity while on board the plane en route to Accra.

Some of them, who spoke to Atiewin Mbillah-Lawson in an interview at the Kotoka International Airport in Accra said although their deportation had nothing to do with criminal issues, they were handcuffed and treated as criminals by the U.S. authorities in Louisiana and even while on board the plane.

According to them, when they reached the airport, the authorities attempted to take off the handcuffs to create the impression that they were treated with respect, an act they thought was hypocritical.

One of the deportees said: “They (U.S. authorities) handcuffed us, they handcuffed us before we boarded the plane. That is why we say we are not getting down unless they allow us to get down with the handcuffs for everybody to see how they have been treating us. That is why we said no, we are not getting down… They called some immigration officers (at the airport) to come and talk to us but we said no we want to come down with the handcuffs on and so they said we should come down. They handcuffed us in the United States. My waist, hands and my legs were all cuffed. Both legs [were cuffed], so you cannot even walk, you cannot eat, you cannot do anything.”

Another deportee narrated: “We have been handcuffed from Monday to today, a lot of people here (Kotoka Airport) today saw it. If you think I am lying, you can ask the people around. If you want to urinate you struggle in the handcuff before passing urine.”

Another disgruntled deportee indicated: “We all left Ghana to America to go and better our future, so we passed through Brazil to Colombia and some of us even died on the way… Now the people handcuffed us, they only gave us bread and water from morning till evening, so when we came here (Kotoka) a lot of the people were fighting them that: ‘You cannot deport us empty-handed; we need money to go home [with].’” 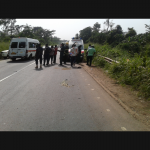