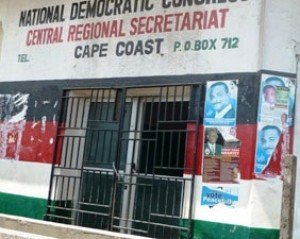 Family of Maame Kumasi with the Ashaiman Constituency Chairman of NDC, Parliament candidate elect of the party at the site

TENSION IS brewing at Lebanon, a suburb of Ashaiman, following National Democratic Congress (NDC)’s decision to build a new house for one of their party supporters whose house was among the several others demolished by the Ashaiman Municipal Assembly (ASHMA).

The beneficiary, Margaret Adongo, 90, popularly called Maame Kumasi, had her place of abode demolished recently by the assembly in an effort to rid the Ashaiman Irrigation Dam site of unauthorized settlements.

It will be recalled that Maame Kumasi had, after the demolition, charged fellow party supporters to vote against the NDC in the impending general elections. She described the party led by President John Mahama as unsympathetic and wicked and must not be retained in power.

But the assembly together with the NDC party, in a quick move, had decided to relocate the woman in a new house leaving the rest who were equally affected by the demolition exercise to their fate.

The decision has angered some of the affected persons who thought the gesture was “politics of favouritism” since they were all Ghanaians and some of them were also NDC supporters.

According to them, they were yet to understand why the Assembly and the party could empathize with only one person when they were all affected by the assembly’s action.

They threatened to do everything possible to stifle the party’s decision unless they all benefit.

Information available to DAILY GUIDE indicated that the NDC Parliamentary Candidate for Ashaiman, Ernest Norgbey had donated assorted items worth GH?1, 000 and undisclosed amount of money to the 90-year-old woman.

The Parliamentary candidate had also purchased a piece of land at Zenu in the Kpone-Katamanso District of Accra to enable him, the party and ASHMA put up a one room self-contained apartment for the woman and her husband who had been sleeping in the open after the demolition.

Mr. Norgbey promised to complete the house within 3-months. 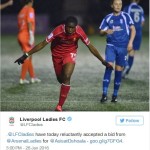