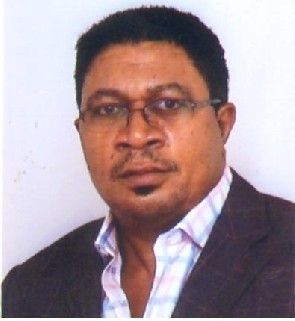 Former Chairman of the Confiscated Vehicles Allocation Committee, and a one-time activist of the incumbent National Democratic Congress (NDC, Carl Wilson, has told Citi News his decision to lead a new political movement to bring Ghana the development it desires, is not borne out of hatred for the NDC or its candidate, President John Dramani Mahama.

Mr. Wilson told Richard Sky, Host of Citi FM’s Eyewitness News on Wednesday that, he only seeks to galvanize the youth and other right thinking Ghanaians to rally behind a non-partisan or independent Presidential Candidate to lead the country after the 2016 elections.

Mr. Wilson said he is against the system of governance where political parties put forward a candidate and therefore feel the need to control him when he becomes the President, even to the extent that the constitutional mandate given to him or her serves no purpose because of party interest and influence.

He said it was time Ghanaians changed their mind-sets about voting for political party candidates if they desire to see real development.

Against this backdrop, he said President Mahama could not be blamed for the
failures of his administration since the system almost makes it impossible for him to be efficient.

“I am not against Mahama; you can blame Mahama and the NDC all you want, or even Kufuor, the NPP or Akufo-Addo. But all that you have to do is to look at the reason why after every election cycle people cry out for change. I am not inventing anything. I am just taking what is there, analysing it and finding solutions. People are craving for change. The NPP’s mantra is ‘arise for change’. That was also the NDC’s mantra before 2008. Is it not the same thing? Why do we have to be running in circle instead of finding the solution to what is ailing us as a country and as a people?

I am against the system

“I am only against the system of governance that we impose on the presidents that we elect. If you take an angel who hasn’t been corrupted before in his life and put that person in the seat of the presidency in 2016; in 2017, you will start crying for change and corruption. It is not the person; it is the system that he is running.

“So condemn Mahama for all you want; it’s the system he has inherited. How can he fix things if the system is not giving him a free hand to fix it? I am not holding up for Mahama but I am pointing out things that are defective.”

Mr. Wilson buttressed his point with the example of how the late President Mills, supposedly ordered the non-payment of the controversial GHC51 million judgement debt to Alfred Woyome, yet the money was paid by the then Attorney General. That incident he said was an example of political party influence that makes a President almost powerless. “So put Mahama in that seat; how do you blame him if that money was paid,” he asked.

“We can’t have a political party sending a President in that seat and expect Ghana to work; it won’t work. What we have to do is to separate the presidency from the party. You have parties elect sending their reps to parliament regardless of whoever has majority in parliament; it doesn’t matter. But the one sitting on top in the executive chair should not have any link with any of the parties in Parliament. He will then have a free hand to operate. He will then have the power that the constitution grants him to run this country for it to work”.

We will push for an Independent Presidential candidate

According to him, one of the key aims of his movement which he calls, Yellow Movement, is to canvass for nationwide support against the country’s current political system in a bid to unseat his former party the NDC while preventing the New Patriotic Party (NPP) from tasting political power in this year’s election. “We are calling for a yellow revolution that is bringing the youth together for a change.

“The youth will be rallied behind an independent candidate to become President of this country in 2016.I am for Ghana and for what is right for this country. I am not against Mahama. I am calling for the system to change to change.”

An independent candidate can win and be effective

If you misbehave and you don’t perform you are fired. If decisions have to be taken in the interest of Ghana, he won’t think about how that’s going to affect the political party first. He will first think about what will work for Ghana and not for any particular individual or party.”

Parliament under an Independent President will be more effective

“If the NPP has good ideas that will work to solve our economic problem, can they take it to the President? No they won’t. So whatever is happening in Parliament is working against the interest of Ghana and that is what we have to seek to change.”