Flagbearer hopeful of the Convention People’s Party (CPP), Samia Nkrumah, has alleged there is massive tax evasion by some multinational companies operating in Ghana.

She attributed the country’s numerous development challenges and excessive taxation to the lack of sincerity and courage on the part of the governing National Democratic Congress and the main opposition New Patriotic Party administrations that have steered the affairs of the country in the last two decades.

Speaking to Class News’ Fred Smith, the former Jomoro MP said: “What we need first and foremost for now is sincerity and courage. Do you know how much illegal repatriation of profits is costing Ghana? That only takes courage; it takes sincerity and honesty. We can generate funds internally with proper and honest management.”

According to her, “There are evasions of taxes, big multinationals are evading taxes, and a lot of the profits created or gained inside the country are repatriated illegally. We are not talking about taxing the ordinary Ghanaian. This is what is happening today”.

Asked if she had evidence to prove multinationals evade taxes, the former CPP chairperson said “it is all there in the books, people know it but people don’t talk about it”.

She disclosed that they will give a full report of such companies during the campaign season, but “it is a well-known fact that we have problems with tackling evasion of huge taxes”.

“Huge taxes are evaded… not only in Ghana but in many smaller countries,” she added.

In her words, “it is time for us to rise up and say no. If even in the case of GMOs, alone, if we allow these bio-tech multinationals to come to Ghana, sell their seeds, we are going to be feeding into that pattern where we will become dependent on a foreign multinational for our food”.

“This kind of approach and behaviour is what makes it easy for us to serve the interest of others, but ourselves. It is time to have the courage to say no to big capital finance and focus on how we can stop the average Ghanaian from bleeding. This is a choice. It is not impossible,” she said. 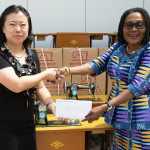