The President of Ghana John Dramani Mahama has hinted of moves to consider capping interest rates in the country.

According to the President the high cost of doing business complained about by businesses is as a result of high interest rates being charged by commercial banks and other financial institutions in the country.

The President who was speaking at the the CEO’s breafast meeting organised by the Ghana Investement Promotion Council stated that, if government could raise a ten-year local cedi bond below the prime rate of 26 percent then interest rates being charged by banks and financial institutions could also come down.

“Interest rates are not controlled by government. I noticed that some countries have passed legislation to cap interest rates. I do not know if that is the path to go, I have asked for advice on that kind of legislation but my believe is that prudent management of the economy will see interest rates decline continuously.”

“All of us need to deal with the issue of high interest rates and the banks and other financial institutions, GIPC and everybody, if we have one opportunity, let us sit down and discuss the issue of interest rates. The economy is showing all the right signals with the service sector overtaking agriculture as the highest contributor to GDP, which is what it should be when a country is developing,” he further stated.

The cost of access credit by businesses in the country is said to be hovering between 30 – 45 percent while some small and medium scale enterprises and individuals are said to be drowning under high interests rates of up to some 75 percent.

The President’s comments comes at a time that the government has raised a 438 10-year domestic bond at a fixed coupon rate of 19 percent to refinance maturing debts and capital expenditure.

the offer which was also open to foreign investors, drew bids of GH¢726 million which is far more than the initial GH¢200 million target the government was hoping to raise.

The issuance of this bond was part of government’s revised calendar for August to December this year where it intends to raise up to some GH¢25.3 billion.

Of this amount, GH¢23.8 billion has been allocated to be used to settle pending bonds or notes nearing maturities with the remaining amount of money being some GH¢1.4 billion being fresh issuance which will be used to meet government’s financing requirements.

The Minister of Trade and Industry, Ekwow Spio-Garbrah at the beginning of the called the central bank to consider placing a cap on the rate of interest financial institutions can give out to their customers on deposits made.

According to the Trade Minister, the Bank of Ghana should learn from other best practices taking place in some advanced countries, where banks and other financial institutions can neither lend nor pay interest beyond certain rates in a bid to protect the interests of clients.

“I think the Bank of Ghana can do what countries like Canada are doing, where it is a crime to charge interests rates above a certain amount so that customers will not be deceived and be given certain rates when they make deposits with such financial institutions,”

Kenya’s President Uhuru Kenyatta in August this year signed into law a bill that would cap commercial bank lending rates at 4 percentage points above the central bank’s benchmark lending rate.

This comes after their parliament passed into law proposed amendments to the banking law to cap commercial interest rates at 400 basis points above the central bank’s policy rate, now 10.5 percent.

The capping of interest rate in Kenya effectively limited the interest rates charged by banks to no more than four percentage points above that of the country’s Central Bank Rate (CBR). 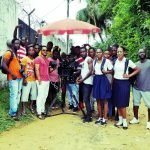