Machete wielding thugs said to be National Democratic Congress members have allegedly inflicted wounds on a New Patriotic Party member in a renewed clashes between the two parties in Kukuom in the Asunafo South District of the Brong Ahafo Region.

Another man, said to be a security guard at the Asunafo District Assembly is also said to have lost his eye in a supposed reprisal attack Thursday dawn that led to destruction of state property at the Assembly and the District Electoral Commission’s office.

The NPP man, whose name has been given only as Busia and a driver to the NPP parliamentary candidate in the area, was attacked in broad day light Wednesday morning in front of the Kukuom Omanhene’s house by the NDC thugs.

Busia who sustained machete wounds in his head and currently said to be in receiving treatment at the Goaso Government Hospital.

“In fact it was an eyesore. That was the first day I saw people butchering human being like meat. They butchered the guy seriously,” an eyewitness [name withheld for security reasons] told 3News Thursday.

There have been a protracted tension between supporters of the NDC and the NPP in the area which occasionally results in attacks and reprisals; something that has put residents in fear for months.

Unconfirmed reports from the constituency suggest the tension is being fueled by the Brong Ahafo Regional Minister, Eric Opoku, who is also the NDC parliamentary candidate for the area.

He is said to be in bed with the Police Commander who reports say, always fail to act by arresting persons who foment trouble in the area.

According to 3News sources who were at the scene, a young man said to be an NPP member had arrived in the town to initiate processes to have his vote transferred from Kumasi to Kukuom when some known NDC supporters attacked him.

The 10 known NDC members in the town claimed the young man was not from the constituency hence subjected him to severe beatings until a group of NPP supporters intervened and rescued him.

Mr Busia after the attack before he was taken to the hospital Within 20 minutes, 10 NDC vehicles branded with President John Mahama and Mr Opoku’s posters arrived in the town with about 40 people brandishing machete and guns.

“They caught the driver of the NPP candidate, Busia and inflicted cutlass wounds on him,” the eyewitnesses told 3News, adding “they then continued to the NPP office where they ransacked everything”.

According to the eyewitnesses, one of the gang members used a pistol to shoot a television set at the NPP office, noting “they destroyed everything there”.

Although six police officers arrived at the scene in a police vehicle, our sources say they failed to arrest the NDC thugs and rather asked eyewitnesses who were filming to stop and vacate the area otherwise the thugs will turn to harm them.

The officers were said to have claimed they could not arrest the thugs because if they do, they will be released few minutes later per the orders of Mr Opoku.

On Thursday dawn, another group believed to be supporters of NPP were said to have also gone to the District Assembly and the EC office to destroy properties in what people suspect to be a reprisal attack. Meanwhile, our sources say Mr Opoku has deployed some military personnel to the ground to effect the arrest of those behind the Thursday dawn incident causing the known NPP guys to flee the town. 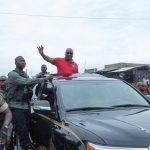