Former Member of Parliament for Asokwa, Maxwell Kofi Jumah has rendered an unqualified apology to the Coalition of Concerned Teacher (CCT) over his comments in response to an ultimatum to the president-elect by the group for the restoration of teacher trainee allowances.

The Former Deputy Local Government Minister and Rural Development in the Kufuor administration had described as ridiculous the call by the Coalition of Concerned Teachers (CCT) on president-elect, Nana Addo Dankwa Akufo-Addo, to restore teacher trainee allowances within its first 100 days in office.

Reacting to the coalition’s call, Mr Jumah said it was unfair on their part to give the incoming NPP an ultimatum.

“Nana Akufo-Addo made a promise and it spans for four years. But to put a gun to his head and give him an ultimatum of 100 days, that is what is ridiculous. If they know how to give ultimatums, I think that they should redirect their ultimatum to the previous government.”

According to him, he “was expecting enlightened people to suggest that we expect Nana Akufo-Addo to put together a budget that will guide his administration so that he will be able to implement some of the things that he said he would do and that would have been a more enlightened approach, but the way they are stating it, they look like a bunch of ignoramuses: they don’t know anything, they are ignorant people. It’s even unfair for them to come out like that”.

His comments have been heavily criticised leading him to render the apology.

“My friends, thanks for your advice and direction. It was never my intention to attack teachers as a whole. Indeed, I am very much aware of the overwhelming support that the NPP got from teachers. I went overboard and I sincerely apologize for that. I was caught off guard. And it was very unfortunate. I sincerely believe Nana will deliver on his promise to our teachers and to Ghanaians. Once again accept my apologies”, he wrote on his Facebook wall. 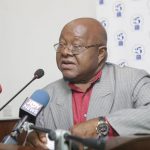