Suspended National Chairman of the New Patriotic Party (NPP) Paul Afoko says the confidence he garnered for the party after he won the chairmanship position in 2014 is no longer there.

He says his roadmap to see even the National Democratic Congress (NDC) capitulate by the first quarter of 2016 has been left to hang.

Speaking on TV3’s Hot Issues – which will be aired on Saturday, January 9 – Mr Afoko said there is no longer utmost certainty over the chances of the NPP.

“For me, to say that based on the confidence with which I walked out of that stadium in Tamale, telling everybody that by March, end of the first quarter of 2016 even NDC will [concede defeat], that certainty is no longer there. It’s a toss-up.”

He, however, indicated that he will vote for the party in the general elections in his capacity as “National Chairman” of the party.

“I will vote for the New Patriotic Party,” he emphasized.

Mr Afoko also questioned the suspension handed him by the party. 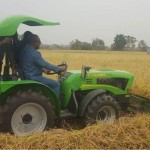