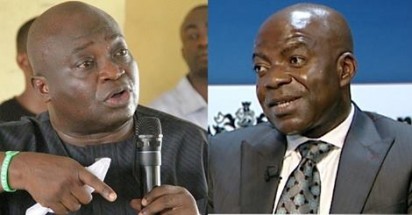 ABA—An aspirant in the December 8, 2014, Peoples Democratic Party, PDP, governorship primaries in Abia State, Chief  Friday  Nwosu, has filed a notice of appeal at the Supreme Court, challenging the judgment of the Court of Appeal, Owerri Division, which sacked Gov. Okezie Ikpeazu from office and declared Dr. Alex Otti of the All Progressive Grand Alliance, APGA, as the governor-elect.

Vanguard gathered that Nwosu had filed a separate suit at the Federal High Court, Owerri, praying the court to declare him the candidate of the PDP at the 2015 governorship elections, alleging that Gov. Ikpeazu presented forged tax documents.

In the notice of appeal which have Alex Otti, his party, APGA; Okezie Ikpeazu, PDP and the Independent National Electoral Commission, INEC, as respondents;   Nwosu who described himself as an interested party in the suit, outlined six grounds of appeal on which the Court of Appeal verdict should not be allowed to stand by the Supreme Court.

According to him, “The Court of Appeal erred in law when it assumed jurisdiction to hear the appeal when the notice of appeal filed by the appellants was fundamentally defective. The Court of Appeal also erred in law when it held that the 1st  appellant (Alex Otti), did not testify to state his claims orally and cannot be a valid reason to hold that he has abandoned his claims. This is an error in law because pleadings not supported by claims are deemed abandoned. The appellant abandoned his deposition on oath and failed to testify at the tribunal. In the circumstances of the case, he was a necessary witness for his case to succeed. Failure of the 1st  appellant (Alex Otti) to present himself as a witness at the tribunal for cross examination is fatal to the case of the petitioners.”

Again, the appellants did not establish that the votes recorded in Osisioma Ngwa, Isiala Ngwa North and Obingwa local government areas exceeded the number of registered voters in the three local government areas. Over voting only occurs when the votes cast in a particular unit or constituency exceeds the number of registered voters.

“The Court of Appeal erred in law by declaring the 1st  respondent winner of the governorship election of 11th  and 25th  April, 2015 on the ground that he scored the majority of lawful votes cast at the election. Ordering a repeat election in Osisioma Ngwa, Isiala Ngwa North and Obingwa is proper application of the construction of Section 53(2) of the Electoral Act 2010, as amended,” Nwosu said.

He urged the Supreme Court to ensure that justice is seen to have been served to all parties in the suit.