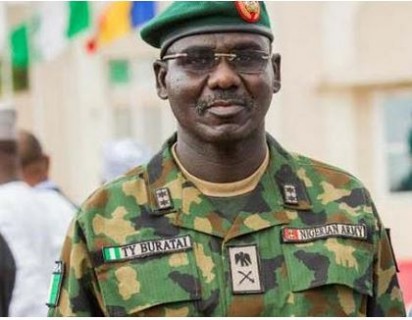 ABUJA—The Chief of Army Staff, Major General Yusuf Buratai, yesterday, appeared before a Special Investigative Panel that was constituted by the National Human Rights Commission, NHRC, to probe circumstances that led to the bloody clash between the Nigerian Army and the Shiite Muslim sect.

This came on a day hundreds of members of the Islamic Movement of Nigeria (Shiites) stormed the commission to protest the continued detention of their leader, Sheikh Ibrahim El Zakzaky, by Nigerian security services.

The clash which occurred on December 12, 2015, resulted in the instant death of many members of the sect, with others seriously wounded.

Army’s petition
However, the Nigerian Army, in a petition lodged before the NHRC on December 14, 2015, maintained that only seven members of the sect were killed during the face-off, with 10 others seriously injured.

It told the commission that the convoy of the COAS was attacked in Zaria at about 2:30pm on that fateful day, by  members of the Shiite Sect under the leadership of Ibrahim El ZakZakky.

Army told the NHRC that Buratai   was on his way from Dutse to pay homage to the Emir of Zazzau before proceeding to the Depot NA Passing Out Parade of 73 Regular Recruit Intakes, when heavily armed sect members numbering over 500 rushed out and barricaded the Zaria PoloGolf Road in the vicinity of their supposed shrine.

Sequel to the petition, the NHRC, yesterday, commenced investigations into the matter by inviting the COAS to personally appear before it to shed more light on what actually transpired between him and the sect.

In his speech, Buratai, who arrived at the commission around 11:30am amid tight security, insisted that the Army acted within its rules of engagement.

He said the Army, as a responsible organisation, would not tolerate a situation where some individuals or organisations will continue to violate the human rights of others.

He said the Army, having sworn to defend the territorial integrity of Nigeria, would always stand against agents of anarchy that do not want rules and regulations or law and order to prevail in the society.

“No society will develop were lawlessness, peace and tranquillity of the average citizen is being trampled upon,” he said.

The COAS said his officers would furnish the NHRC probe panel with sufficient evidence, including videos and photographs, showing how members of the Shiite sect attacked his convoy.

“It is not in the best interest of the nation for such lawless acts to be condoned or for the Army to be unnecessarily condemned in the media. If the Army is ridiculed, then we are not doing our country any service. We must support the Army. We are facing a very serious challenge right now, which is our fight against insurgency.

“With what we have seen, if the Islamic Movement in Nigeria is allowed to move and operate freely the way it has been doing, the Boko Haram challenge will be a child’s play,” Buratai added.

The COAS said he appeared before the NHRC due to his respect for human rights.

“We are here because we know the sanctity of human life which we have sworn to protect,” he said.

Earlier, Executive Secretary of the NHRC, Prof. Bem Angwe, said the aim of the five-man probe panel headed by Tony Ojukwu, Director, monitoring department, was to unravel the truth behind the Zaria killings.

Noting that the commission received a total of 158 memoranda from 13 states of the federation, Angwe said the commission would be fair, firm and decisive on the assignment.

He said the NHRC will at the end of the probe, which he said would be held in camera, make its findings public.

Meanwhile, prior to the arrival of the COAS, members of the Shitte group, besieged the NHRC complex, seeking the unconditional release of their leader, El ZakZakky, from detention.

The protesters who were led by Shehu Ahmed Bello, said they would not appear before the probe panel which they said had anti-Shiite members.
Shehu boasted that there were over 40 million members of the Shiite sect in Nigeria, saying “we are ready and willing to sacrifice 20 million of us to secure our freedom in Nigeria.’’

The members, including women and children, had stormed the commission carrying placards with inscriptions, “free our leaders,” “we are peaceful citizens,” and “we want Justice.”

Though members of the movement were peaceful, their presence at the entrance to the National Human Rights Commission caused a traffic snarl as cars slowed down to watch what was happening.

The presence of members of the sect at the commission forced management staff of the commission to come out of their offices to address the largely youthful protesters.

Bello said they were forced to lead a peaceful protest to the commission to draw attention to the continued detention of their leader.
According to him, the mission of the protesters to the NHRC is to complain about the massacre of their members by the Nigerian Army.

“We are here to complain to the appropriate authorities so that we can see if we can get justice. If Justice is not done, then all of us are Zakzaky, so government should come and kill us.

‘’Sheikh Zakzaky has over forty million followers in this country. If we sacrifice twenty million of our members, maybe our blood will end the Nigerian federation,” he said.

According to Mallam Bello, during the bloody encounter between members of the IMN and the Nigerian Army in Zaria last year, one of the members lost 12 of his children ‘while over one thousand members of the Shiites sect are still in detention.

He added that 700 othe members had been declared missing, while 6000 were killed in two days.

He said: We Don’t know whether the federal government has declared war against us. If we are in country where people have conscience, killing 6000 in two days in a country not at war is enough to motivate the elite to speak for us, to invoke the men of God in the society to advocate for us.

‘’But why are we an exception? Why is everybody keeping quiet? That is why we have come peacefully to lodge our complaints here.”

Receiving the protesters on behalf of the executive secretary of the commission, the Director in charge of Monitoring and chairman of the panel set up by the commission to investigate the Zaria incident, Mr Tony Ojukwu, commended members of the sect for their peaceful conduct.

Ojukwu promised that the commission would be fair and impartial in its investigations, adding that the matter would be pursued to its logical conclusion.