The Electoral Commission (EC) says Dr. Zanetor Rawlings is not a registered voter per their records.

The contention on Dr. Rawlings’ eligibility comes after Nii Armah Ashietey, a failed parliamentary candidate, challenged in court that Zanetor’s victory was unlawful since she’s is not a registered voter.

But Ephson said Rawlings would have rather found herself wanting in her bid to contest the 2016 parliamentary elections, if there were no limited registration on the EC’s calendar before the general elections.

“I think it’s an incorrect statement for anyone to say she’s not a registered voter and that cannot vote in the election while there is an upcoming limited registration yet to be held in April,” he told host Fiifi Banson on Anopa Kasapa on Thursday.

He said should the court even go ahead nullifying Zanetor’s election because she’s not a registered voter, there will still be ample time for the NDC to set a date that may favour Zanetor’s inclusion in a re-run. 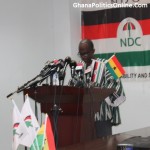