Unlike the previous years where the industry was plunged into controversies, the year 2015 was a different story.

The industry did not only break new grounds on the international scene, it also witnessed a couple of marriages that have continued to be the talk of the town.

From Lizzy Anjorin who tied the knots with her long standing lover, Jibo Morgan, in the month of June, to Nollywood hunk, IK Ogbonna, who also exchanged marital vows with his girl friend, Sonia Morales, few days after they welcomed their first child in far away Columbia, Nollywood was at its best in 2015.

Controversial actress Tonto Dikeh’s marriage to her hubby, Churchill Oladunni, remains one marriage that shocked many industry watchers and one which they would not stop talking about.

The light-skinned diva shocked her friends and woes when she held her traditional marriage on August 30, 2015. In fact, since she got married, Tonto has been missing at social functions, thus telling anyone that cares to know that “marriage has really changed her.”

Also, notable producer of the wave-making Igbo movie, “The Primitive”, which recounts the horrible story of how the early Christians faced prosecution in the hands of the primitive Igbo natives back in the days, Iyke Odife walked down the aisle with the actress that played the lead character in that movie, Anita Amaka Okere. The couple held their traditional and white wedding ceremonies the same day on the 5th of December, in Asaba and the bride’s home town, Amaobia, in Awka, Anambra State respectively. Actor and society big shot, Jazzy Okey, also got married to his long time lover, Annie Ogochukwu Anaedum. Those who attended their traditional marriage described it as “one of the best in Nollywood. It took place at the bride’s home town in Akabor-village, Ojoto, Anambra State. Other marriages that rocked Nollywood in 2015 include that of actor Gbenro Ajibade and Osas Ighodaro, both stars of “Tinsel”, which took place on Saturday July 4, 2015 in New York, sexpot, Chita Agwu and her Malaysia-based hubby, John Maduabuchi and Mimi Orjiekwe and Charles Billion which took place on Saturday July 18, 2015.

Low Moments
Except for a few low moments, 2015 was a year of bumper harvest for the industry. A lot of good things happened to the industry last year; new great movies hit the cinemas just as the industry made a lot of impacts on the international scene. For the ugly side, the industry lost some of its vibrant actors to the pangs of death. They were Muna Obiekwe, Peter Bunor and Dede One Week. This year is predicted to be the best year ever for the industry because a lot of things have been put in place to move the industry forward. 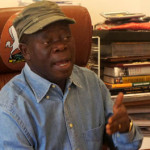