A couple of weeks ago ASEPA issued a statement asking the attorney general to be cautious in order not to incur further judgement debt against the state in the Woyome saga.
We further expressed our dissatisfaction at the way the AG was handling this particular case which is of interest to every Ghanaian.

On August 3rd,2017 the International Chamber of Commerce where Mr.Alfred Agbesi Woyome was seeking some major declarations and reliefs issued a statement suggesting that in accordance to Article 6(4) of it’s regulations the case could not proceed.

The two paged document also suggested that an administrative cost of $5000 was duly charged the claimant.

This intriguing revelation by the ICC didn’t come as a surprise to some of us who have been following this case since 2010 and have always been of the view that the Supreme Court of Ghana erred in linking Mr.Woyome’s claims for works done for the state in 2005 to a waterville contract in 2006 on which basis it asked Mr.Woyome to refund all his entitlement paid him.

However what was shocking was a deliberate attempt by the media to twist the facts as presented by the ICC and to create a wrong impression in the public domain.

The fact of the matter is that ICC has declined arbitration to the matter because according to its own arbitration laws Mr.Woyome is not a party to that 2006 contract which he was linked to by the Supreme Court a decision that only goes to emphasize the claims of Human right abuses that Mr.Woyome is seeking redress for at the African Human Rights Court.

Subsequently the African Human Rights Court after studying the case of Mr.Woyome has also established a prima facie case against the state and has ordered the state to appoint its lawyers by Tuesday 8th August, 2017 and then thirty clear days thereafter to file its defence.

If this is anything to go by then the ICC ruling is only but a vindication for Mr.Woyome and as things stands Ghana is likely to loose this international case.

What’s more, the country is going to expend millions of cedis to compensate Mr.Woyome amidst this unbearable economic situation which the present government has only worsen.
Our Supreme Court is also going to be heavily ridiculed internationally for such unprintable errors all because the government has not been particularly truthful with Ghanaians.

The government still have time to save the whole nation some embarrassment,by reviewing its decisions and using ADR to resolve this matter and save the country all the cost that comes with litigation and compensation as we have cautioned earlier.

The work done by the Ghanaian media when it comes to the reportage of this Woyome saga has been very unimpressive.
The media are not asking the right questions and they only indulge in sensationalism and we are all likely to loose because of the poor work done by the media in this particular matter.

Those pursuing this matter wrongly has nothing to loose because, when they incur damages,the state pays for it.

Have the media even questioned government how much it has spent in this endless,needless and wrongful litigation?

How much have we lost in terms of remuneration to lawyers both locally and internationally,legal fees,travel costs,remuneration of judges,social goodwill and other opportunity costs?

How is the state funding this litigation when the District Assembly statutory payments are in arrears as far back as 2015?
When Nurses and Teacher Trainee allowances have not been restored and several graduates from private Nursing Training Schools are picketing for financial clearance to be employed by the ministry of health.

Where did we go wrong as a nation?,Have we lost our priorities?
How can a whole country through the support of the media back a needless political persecution of one person with our own state resources when we can’t even pay salaries of civil servants?

What we asking the Attorney General to do is to review its position on this matter,it may too late in a few weeks time and we will not forgive him if he goes to make a mockery of the Ghanaian judicial system at the African Court of Human and People’s Rights. 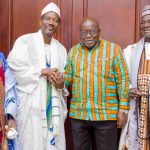