Ten [10] months to election 2016 and obviously some individuals within the entertainment industry will publicly throw their support behind some political parties.

This has been in existence for some time now with the likes of Hi-Life artistes, Kwabena Kwabena and Daddy Lumba composing danceable tracks for the NPP – Lucky Mensah has also been a regular composer for the NDC as well – as actors Mr. Beautiful and John Dumelo campaigning vigorously for the NDC in the last elections.

But the entertainers are likely to face a huge sabotage in the Ashanti Region if any attempt is made to campaign for President John Dramani Mahama in the upcoming polls.

They have been warned by the Ashanti Regional Chairman of the opposition NPP, Bernard Antwi-Boasiako also known as Chairman Wontumi to stay away from the NDC and President Mahama if they want good patronage of their products in the Ashanti region.

Wontumi vowed on NEAT FM’s morning show ‘Ghana Montie’ that he will personally lead a crusade to sabotage any entertainer who will campaign for President Mahama in the Ashanti region.

“Those [entertainers] who will go for bribe from the NDC and campaign for President Mahama, I together with my people will see to it that their products are abandoned in the Ashanti region. They should rather campaign for poverty and help the needy rather that the NDC and Mahama,” he told host Kwesi Aboagye. 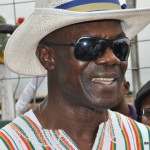