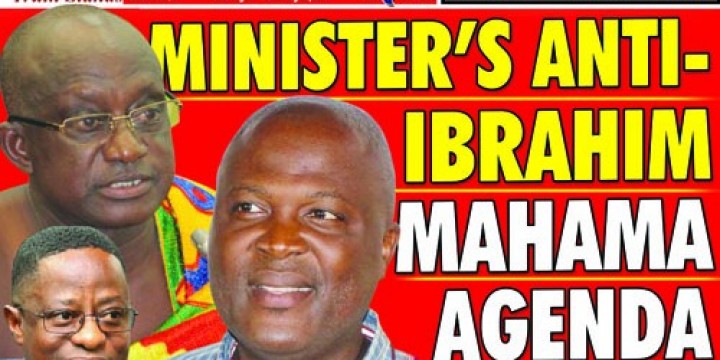 National Democratic Congress (NDC) has accused the Ashanti Regional Chairman of the NPP, Bernard Antwi Boadiako popularly known as chairman Wontumi for remote-controlling the regional Minister, Simon Osei-Mensah in order to settle personal scores with businessman, Ibrahim Mahama.
According to the party, the conduct of the Minister is not surprising judging from the chronology of events.

This comes at the back of some mining equipments seized by the Regional Minister, Simon Osei, belonging to Engineers and Planners (E&P).
Background

Simon Osei Mensah, had clashed with Lands and Natural Resouces Minister, Peter Amewu, for authorising the prospecting of bauxite in the Tano Offin Forest Reserve.

Mr. Amewu’s Ministry, through the Forestry Commission, recently issued a license to Exton Cubic Group Limited, to mine bauxite in the Ashanti Region amidst a clampdown on illegal mining activities.
The mining company, in turn, engaged E&P, a company owned by Ibrahim Mahama, brother of former President John Mahama. E&P was to use its equipment to undertake a prospective service.
Ibrahim Mahama

However, Exton Cubic Group Limited has refuted claims that, the company in collaboration with Ibrahim Mahama, are engaging in illegal mining activities at the Nyinahin bauxite concession and were thus run out of the concession.

The company said the seizure of vehicles belonging to E&P, was done unlawfully on the instruction of Simon Osei Mensah.
Read Exton Cubic’s press statement: Minister accused of unlawful seizure of mining trucks
War between Wontumi and Mahama
Ibrahim Mahama and Wontumi have been at each other’s throat with the NPP chairman accusing Mr Mahama of being a thief and dishonest man with criminal tendencies.
Following the collapse of UT and Capital bank by the Bank of Ghana, Chairman Wontumi also accused Ibrahim Mahama for collapsing UT bank.
READ ALSO: Minister may face legal action for seizing mining equipment of Engineers and Planners
He said “He [Mahama] ‘killed’ Merchant Bank and UT Bank. He borrowed over $100m from UT Bank.”
play
Ashanti Regional Chairman, NPP Bernard Antwi Boadiako populayly aka chairman Wontumi

NDC reacts
But the NDC in a statement signed by Abass Nurudeen, an NDC communicator in the Ashanti Region said this is a golden opportunity for Wontumi to show Ibrahim Mahama where power lies.
Below is NDC’s press statement
THE ASHANTI REGIONAL MINISTER IS BEING USED AS A PAWN BY WONTUMI TO SETTLE SCORES WITH E&P AND IBRAHIM MAHAMA
Many are those who have expressed shock and surprise by the unfortunate conduct of the Ashanti regional minister, Hon. Simon Osei Mensah, relative to the seizure of mining equipments belonging to E&P. The DCE of the Atwima Mponua District, acting on the instructions of the minister, illegally impounded these equipments while on it way to engage in preparatory works at a legally acquired bauxite concession of EXTON CUBIC LTD.
Deep throat sources from the Regional coordinating council indicate that Mr simon Osei Mensah is under strict instructions from the Ashanti regional chairman of the NPP- chairman Wontumi- not to release the machines. As a self-acclaimed governor of Ashanti, chairman wontumi believes this is a golden opportunity to show Mr. Ibrahim Mahama where power lies.
play
Ashanti regional Minister, Simon Osei-Mensah

Is it therefore not surprising that, the Ashanti regional minister is still holding on to the machines even after the Lands and forestry Minister has asked him to release them?
Is it not strange that even after the minister has been furnished with all the necessary documentary proofs by people within his own government he is still adamant?
Does the Intransigence of the Ashanti Regional minister not lend credence to this claim?
This feeds into the general sense of lawlessness and Arbitrariness that has engulfed the 7-months old Akufo Addo Government ;A govt in which ministers would rather serve the interest of their masters rather than follow due process; a government in which genuine businesses are deliberately impeded from operating on the altar of political expediency..it is indeed a sad day for AMA GHANA.
Maybe, the Ashanti regional minister needs to be reminded that Ghana is a nation governed by laws and not on whims of self conceited government appointees who take instructions from political simpletons; may he be reminded once again that, through this act of indiscretion, he is effectively opening the government up for huge legal liabilities that may culminate in the payment of huge government debt.
But In all these, it is the hypocrisy of our society that l abhor the most; we have a president who has appointed his siblings as ministers of finance, works and housing, Roads and highways, Attorney general etc. We have a president who has appointed his blood daughters as board members and baby Mamas as ambassadors. Nobody seems to see anything wrong with this but these same people see everything wrong with a former president’s brother acquiring a license to engage in legal mining. We are, indeed living in interesting times.

The activities of EXTON CUBIC LTD within the Tano-Offin Forest Reserve- including the establishment of an integrated Aluminum industry-has the potential to create 40, 000 direct and indirect jobs and for a government that won power on the altar of providing jobs for the teeming unemployed youth, it is only fair and logical that it sheds it’s political lenses and support this noble cause by an illustrious son of the land.
Abass Nurudeen
(0269690922)