The Ghana Gas Company has rubbished claims that there might be a return of “Dumsor” in 2017.

A letter written by the Volta River Authority (VRA) has revealed that Ghana is likely to experience a 15- day interruption in gas supply from February and the month of March.

The VRA in the letter said that “power from Ameri Energy will also not be available during that period.”

The energy think tank, Africa Centre for Energy Policy (ACEP), has earlier predicted the comeback of the electricity crisis in 2017.
In a report titled ‘Beyond 2016 Elections, Energy Sector Priorities’, ACEP warned the return in April 2017 of the much-dreaded electricity crisis, popularly known as dumsor.

According to ACEP, dumsor’s comeback will be as a result of the inadequacy of fuel to power Ghana’s generation plants.
But the Chief Executive Officer of the Ghana Gas Company, George Sipa Yankey has said that there is enough power available.

“I am not too sure that we are going to have dumsor in January,” he said.
He added that even though he is aware that Tullow may shut down for some repair works, “During that period, luckily, TEN will also come on stream.”

Mr Yankey stressed that Ghana is “still producing power without any dumsor.”

He noted that Ghana Gas has enough gas to supply to the VRA if Nigeria gas suspends gas supply to Ghana. 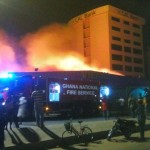