An unknown lady has offered controversial musician Kwame Asare Obeng aka A-Plus, for exposing ‘corrupt’ appointees in the government of President Nana Addo Dankwa Akufo-Addo.
The outspoken musician has been a strong critic of some government appointees.

Earlier, he described members of the New Patriotic Party (NPP) in government as thieves.

According to him, the appointees will regret knowing him adding that he will fight them till they drop dead.

A Plus made this comments after Communications Minister Ursula Owusu Ekuful has threatened to take legal action against him over what she describes as libelous comments made against her.

In a recent Facebook post, A Plus suggested that the recent arrest of President of the Ghana Football Association (GFA) Kwesi Nyantakyi on allegations of defrauding by false pretense was just a move to cover up other scandals.

According to him, Nana Addo’s order is to divert attention from the heat on the Minister for Communications who’s embroiled in the $89 million Kelni GVG shady deal.

He stated that the alleged corruption in the government of the New Patriotic Party (NPP) began even before they won power.

However, A Plus in a conversation on social media (Whatsapp), a lady expressed her love for him due to his ability to stand up against corruption in government.

The lady in a Whatsapp chat wrote: ‘I love you Kwame hahahaa come for sex’.
But A Plus rejected the sex offer and said he’s married. 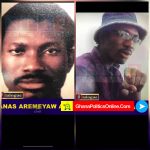