Legal practitioner Samson Lardy Ayenini says hiplife musician Wisa, known for the hit song ‘Ekiki Me’, if found guilty for removing his manhood on stage during a performance, may only pay a fine of GHc120.

The fine, he noted, is the maximum charge for the misdemeanour charge against the musician.

The rapper, born Eugene Ashie, did the unthinkable while performing at this year’s Decemba 2 Rememba concert organised by Accra-based Citi FM on December 24.

Midway through his performance on stage, the musician while wiggling his waist behind a voluptuous lady drew down his white boxer shorts which was already showing in his saggy jeans and pulled out his manhood, rubbing it behind the lady.

Wisa had personally, as well as his management in a statement, apologised to Ghanaians for his behaviour.

He told Joy News in an interview after he was charged with indecent exposure that, “I put all the blames on me and I accept it, I agree to it… I’m ready to face the law.”

Curiously, the rapper pleaded not guilty to the charge of gross indecent exposure when he appeared before an Accra Circuit Court.

In court, his counsel Jerry Avenorgbor argued that what the artiste did was for the “beauty of entertainment” but people did not get the drift. He suggested later in an interview that the penis he displayed was a fake.

Samson Lardy Ayenini commenting on the issue in an interview on Rhythmz A-Z on Joy FM with Mamavi Owusu-Aboagye Saturday said Wisa would be charged GHc120 if found guilty.

“The law is clear on it. It’s a misdemeanour and the sanction it attracts is a maximum of GHc120. He will be given the fine, if he is unable to pay in default of the fine, then you go into jail,” he explained.

The legal practitioner added that “I do not see any judge saying he should pay the fine and go into jail at the same time. In any case it’s a misdemeanour and in a misdemeanour your inability to satisfy the fine that is impose on you will only attract just a couple of weeks in prison perhaps one or two months in prison…the purpose is just to caution you so you don’t do it again.”

“You could actually get just a caution and bonded to be of good behaviour,” Mr Ayenini noted.

The legal practitioner refuted arguments that Wisa’s public apology will be irrelevant in court due to the legal stance taken by his lawyers.

Mr Ayenini, who is also the host of Newsfile on Joy FM and JoyNews on MultiTV, cited Dr Sulley Ali-Gabass denying his statement he made to Manasseh Azure when he was investigating the sodomy matter as an example.

He said the medical practitioner is now in jail serving the maximum jail term of 25 years. “Let’s be serious about all of this,” he said and added that any attempt to think that it will not be tendered in or used in court is “the biggest joke I have heard.”

The court has meanwhile granted Wisa bail and will reappear on January 13, 2016. 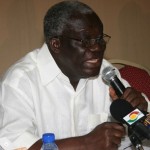