Embattled hip-life artiste, Wisa, could face up to three years in jail for exposing his genitals in public.

Police are wrapping up investigations into the incident which occurred at Citi FM’s Decemba2Rememba concert on Christmas Eve, 2015.

Former Attorney General, Nii Ayikoi Otoo, has said even though the musician could get off the hook with just a fine, he should also expect a possible three-year jail term as stipulated by the law.

There are speculations that the ‘Ekiki Mi’ hitmaker could also be charged for sexual assault.

Mr. Otoo said even though “one act can lead to so many offences,” “as to whether the prosecutors can succeed with each and every one of them is another matter.”

He said if the person pleads not guilty, the state will need to provide evidence and if the evidence is not forthcoming, that will lead to the case being doomed.

In his view, Wisa will not be charged with any serious offence. “This is something like a misdemeanour,” the former Attorney General averred.

He said a sanction for misdemeanour is three years in jail but he believes Wisa could just be fined.

He said such charges are sometimes used to check others and act as a deterrent.

Wisa at the peak of his performance at Citi FM’s D2R concert at the Accra International Conference Centre on Thursday December 24, 2015 flashed his manhood on stage.

He has since apologised for his action. 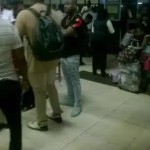