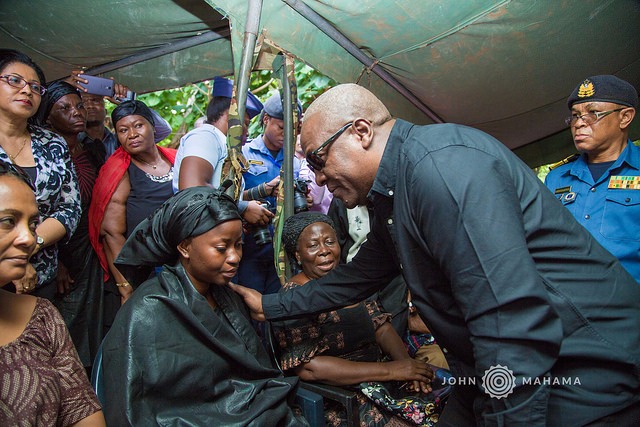 Ex-President John Dramani Mahama has pledged to take up the responsibility of supporting and nurturing the youngsters left behind by the late Captain Adam Mahama.

Captain Maxwell Mahama who passed away under very sad circumstances left behind a very young wife and two toddlers.

In a tribute message to his nephew, Mr. Mahama said the family will support his wife through this unfortunate incident and safeguard the future of the children.

“As a family, we will do our bit to console our daughter; his wife, and we’ll also do our bit to look after his children and bring them up”, he said.

He described the incident as ‘unacceptable’ and ‘very sad’, and condemned persons involved in the gruesome act. According to him, it was very inappropriate for citizens to subject the very same persons tasked to defend them to such treatment.

“The military is an institution that sacrifices a lot to defend us, and for those who defend us to become the victims of ourselves, for us to inflict this kind of death on them is unacceptable, completely”.

Mr. Mahama expressed his condolences to the widow and the Ghana Armed Forces. He asked government and all security institutions to as a matter of urgency collaboratively work to bring perpetrators of the “dastardly act” to book, this he says will deter others from doing same. He also appealed to all to desist from politicizing the issue and admonished citizens to be disciplined and work towards securing a peaceful country.

‘I believe government and the security agencies will do everything possible to bring the perpetrators of this dastardly act to book. We should find out who did it and properly prosecute them and apply the penalty….it will serve as a deterrent to people who engage in mob justice……..it is my hope that we will use this as a lesson to behave in a manner that is disciplined that allows our country to make the progress that we want it to make and I also appeal that we don’t politicize this’, he said.