The 2016 presidential candidate of the New Patriotic Party, (NPP) Nana Akufo says he has respect for the chieftancy institution and will not destool any chief if elected.

Nana Addo said the constitution debars chief from partisan politics and he has no interest in who will become a chief.

Nana Addo was addressing party supporters on his final day of the central regional tour.

Nana Addo entered the Assin constituencies with a rousing welcome.

Supporters besieged the streets with the red, white and blue colours of the party.

All the places visited the Nana Addo was ambushed with supporters who occasional stop his convoy for him to address them.

Nana Addo responded to claims that if he becomes president, he will destool any chief who is in disagreement with him.

He wondered why he has become focus of the NDC instead of the NDC telling Ghanaians what they will do for that.

He said no amount of lies about will him will stop stop him from winning the elections.

Acting General Secretary of the Party John Boadu said the party will revive industries in the constituencies that were collapsed under the PNDC.

He was grateful for the constituencies for the massive show of support for the party. 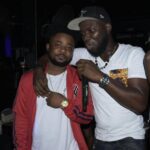