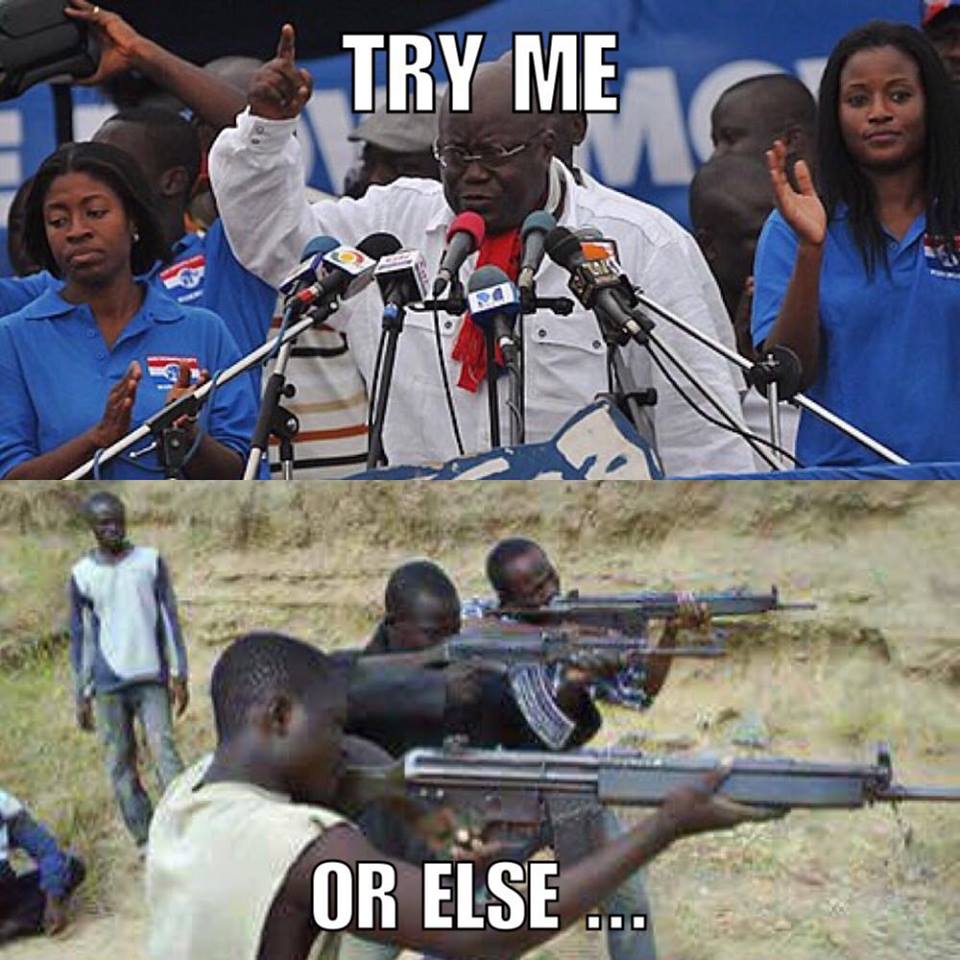 It is becoming increasingly obvious that the issue of drug use and arrogance among others are now an albatross that is getting more tightly fixed around the neck of New Patriotic Party (NPP) flagbearer, Nana Addo Dankwa Akufo-Addo, as the allegations have now formally taken an international dimension. The latest to give credence to the barrage of the damning allegation of drug use against the NPP flagbearer is a newly released declassified wikileaks report by former United States Abbassador to Ghana, Pamela Bridgewater, on the profile of NPP presidential aspirants ahead of the 2008 elections.

The report had this to say about the two-time NPP flagbearer: “Nana Akufo-Addo: An ethnic Akyem from the Eastern Region, Akufo-Addo is a formidable contender for the NPP slot. He is respected for his intelligence, political family background, and broad government experience, which includes tenures as Minister of Justice and Minister of Foreign Affairs. He is reportedly backed by NPP youth and Akyem businessmen. On the other hand, he has poor organizational skills and often comes across as arrogant and formal, which may not play well with many party activists and Ghanaian voters. His reputation as a womanizer and occasional marijuana smoker may also damage him politically.” At the time the confidential report under the subject ‘GHANA AND THE 2008 ELECTION: PROSPECTS FOR THE RULING NPP’ was written, only eight of the seventeen flagbearer aspirants of the NPP had declared their intention.

Please read the full report below:

C O N F I D E N T I A L SECTION 01 OF 03 ACCRA 002270 SIPDIS SIPDIS E.O. 12958:
DECL: 09/25/2016
TAGS: GH PGOV PINR
SUBJECT: GHANA AND THE 2008 ELECTION: PROSPECTS FOR THE RULING NPP ACCRA 00002270 001.2 OF 003
Classified By: PolChief Scott Ticknor for reasons 1.5 d and e. 1. (C)
Summary: Ghana,s 2008 presidential election is still far away and the ruling New Patriotic Party will not choose its presidential candidate until its scheduled December 2007 convention. Nonetheless, there are already at least twelve contenders for the NPP flag-bearer position, including a number of sitting ministers and the Vice President. This is creating friction within the party, which will only intensify over the coming year. At this point, Vice President Aliu Mahama and Foreign Minister Akufo-Addo are front-runners. The party,s choice of a candidate and its success in managing its internal tensions will be key to its success in 2008. End Summary 2. (U)

Profiles of the Main Aspirants

4. (C) The most prominent aspirants are profiled below:

Nana Akufo-Addo: An ethnic Akyem from the Eastern Region, Akufo-Addo is a formidable contender for the NPP slot. He is respected for his intelligence, political family background, and broad government experience, which includes tenures as Minister of Justice and Minister of Foreign Affairs. He is reportedly backed by NPP youth and Akyem businessmen. On the other hand, he has poor organizational skills and often comes across as arrogant and formal, which may not play well with many party activists and Ghanaian voters. His reputation as a womanizer and occasional marijuana smoker may also damage him politically.

Aliu Mahama: As Vice President, he has the advantage of national name recognition. He is generally seen as likable and has become more visible in the past months, projecting himself as presidential. The fact that he is Muslim on balance will probably hurt his presidential ambitions. (Some contacts doubt that the majority Christian population is prepared to select a Muslim candidate, and Aliu is unpopular even within some elements of the Muslim community.) Although a northerner, his support in the northern heartland remains weak because of discontent among unemployed youth, persistent poverty in the north, and a perception that he did little to resolve the long-standing Dagbon chieftaincy dispute. Aliu is isolated within his party and is seen by some as unable to control senior presidential staff. He is not identifiably linked to any major achievement in the NPP and so far lacks the requisite handlers and core advisors to manage a presidential campaign. Aliu flirts with Iran and hopes Kuwait and Saudi Arabia will help generate campaign resources

Dr. Kofi Konadu Apraku: A Ph.D. economist, Apraku was an economic spokesman while in opposition but was seen as a weak Trade and Industry Minister and later Regional Cooperation and NEPAD Minister in Kufuor,s cabinet. Kufuor dropped him in the April/May Cabinet reshuffle. He is an NPP loyalist but lacks substantial support within the party.

Kwame Addo Kufuor: Defense Minister and younger brother of President Kufuor, he has abundant resources, broad technical experience, and the support of key Ashanti businesses. His sponsors hope for a coalition with a northerner or Ewe as a running mate. However, many in the NPP are concerned that selection of the president’s brother and another Ashanti would leave the party vulnerable to accusations of cronyism and ethnic bias.

Yaw Osafo-Maafo: A former Minister for Education, Youth and Sports and a former Finance Minister, he has a reputation for leadership. He is credited with helping revive the economy and restoring macroeconomic stability soon after succeeding the NDC. He gained kudos when as Education and Sports Minister the national soccer team, the Black Stars, qualified for the World Cup. He has substantial wealth to support a presidential campaign. Nonetheless, his involvement in corruption and his open ambitions cost him his position in the April 2006 cabinet re-shuffle and could hurt his race for the party ticket. His campaign seems to have lost some steam in recent weeks.

Hackman Owusu Agyeman: a tough party operator with a power base in the Eastern Region, he is a founding member of the NPP party and has held several important party positions. He entered parliament in 1997 and served as the party,s Ranking Member for Foreign Affairs. His biggest strength is his extensive experience. He has been in cabinet since the beginning of the Kufuor era, first as Foreign Minister, later as Interior Minister, and currently as Minister of Water Resources, Works and Housing. Working against his candidacy are his Ashanti roots (his supporters refer to him as a Juaben, but he is technically Ashanti) and his prickly, sometimes belligerent and elitist personality.

Allan Kyerematen: A respected, popular technocrat and Trade Minister, he is seen as a moderate and a rising star of the party. He gained respect as former Ambassador to the United States and as the originator of the President’s Special Initiatives (PSI) concept. He is gradually building a base within the Central and Western regions and is a close ally of party chairman, Peter Mac Manu, Education, Science and Sports Minister, Papa Owusu Ankomah, and Attorney General Joe Ghartey. He may have difficulty because of his Ashanti ties (his mother is Ashanti and his father Fanti). He also lacks electoral experience and has faced criticism for the lackluster performance of the PSI.

5. (SBU) Personal Traits: the NPP will want a candidate with broad popular appeal. This may favor Aliu and Kyerematen. To a lesser extent, it may also help Akufo-Addo because of his polished, intellectual image.

6. (C) Kufuor,s Role: President Kufuor publicly remains impartial among the various contenders, conscious that any favoritism at this time (especially toward an Ashanti) would undermine party unity. Although some in the NPP resented Kufuor’s attempts to impact the selection of party chairman last year, Kufuor will eventually have an important, low-key influence on the party’s choice of presidential candidate. Some contacts are convinced that Kufuor privately favors Alan Kyerematen. PNC leader Edward Mahama agrees with this, recently telling Ambassador that the Asantahene (an important power broker in the NPP and close to Kufuor) dislikes Akufo-Addo because of his ties to a rival traditional leader.

7. (C) Ethnic and Regional Balance: The NPP will probably seek a shift from its main power base in the Ashanti and Brong Ahafo Regions to the Eastern Region, its second traditional support base. Rivalry between Ashantis and Akyems have undermined unity in the NPP and its predecessors, costing them victory in the 1979 election. The party may therefore favor Akyems to counterbalance its current Ashanti leanings. This may benefit Nana Akufo Addo, Yaw Osafo Maafo and Hackman Owusu Agyeman ) all from the Eastern Region (the first two are Akyems). Some observers, however, believe that the NPP will focus on appealing to the key swing Central, Greater Accra and Western regions. This may favor Kyerematen or a possible dark horse of the likes of Minister of Education Papa Owusu-Ankomah (who reportedly is exploring a candidacy).

8. (SBU) The NPP,s success in influencing upcoming District Assembly elections and in winning parliamentary by-elections will also impact its decision about a presidential candidate. NPP leaders will also weigh the nature of the opposition (reported septel) and the national mood. The party,s ultimate electoral success will depend on many factors, including the GOG,s ability to translate economic success into poverty reduction and to manage perceptions of growing corruption.

9. (C) We can expect heightened friction within the NPP and the government over the coming year, with the likelihood that some NPP candidates will eventually break from the party to form their own parties, join the nascent Democratic Freedom Party, or run as independents. How this plays out will be a major factor in the NDC,s prospects. As one media contact, told PolChief, the NDC,s chances in 2008 depend to a significant extent on &the level of NPP self-destruction. BRIDGEWATER