The wife of David Ajorlolo, Campaign Manager for Ashaiman MP, Alfred Agbesie, has been shot dead by suspected armed robbers at Ashaiman-Zenu Washington in the Kpone Katamanso District in the Greater Accra Region.

Adom FM’s Isabella Gidiglo who visited the scene reported that the deceased, Bernice Ajorlolo and her husband, were attacked by the armed men at around 2:15am, Monday.

They shot and killed his 41-year-old wife through a trap door at the house after the couple resisted attempts by the robbers to break in.

“They ordered us to open the door after we forced it closed (but we refused) so they shot through the door and it hit my wife’s chest”, he told Adom News Monday. She died instantly.

“When they broke in and could not get any money, they took away only a TV leaving the other valuable materials” he added.

The campaign manager told Adom News, he suspects foul play. Her wife was having a five-month pregnancy.

Ashaiman MP Alfred Agbesi expressed worry over the unfortunate incident and says he hopes that the Police find and bring the perpetrators of the act to book. 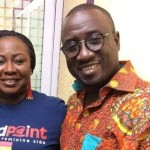