President John Dramani Mahama has thrown light on why he rewarded a taxi driver who foiled a robbery attack at Cantonments in Accra on Saturday with a house.

The driver rammed his taxi-cab into a motor bike that was conveying two suspects away from a robbery scene where they had shot a female employee of Koala Supermarket, who was believed to be carrying money to the bank.

In a media briefing at the Flagstaff House in Accra on Tuesday morning, the President said the taxi driver, Nana Yaw, demonstrated remarkable bravery that needed to be recognised.

He said the driver could have been killed by the armed robbers, if his attempt to injure them had failed.

The President said he had directed that he be allocated a three-bedroom apartment at the affordable housing estate.

He also expressed gratitude to Koala for offering to purchase a new taxi for Nana Yaw. 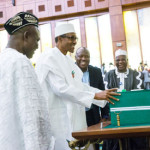