Agnew was mostly an unknown when Richard Nixon picked him to be his Vice Presidential nominee in 1968. Despite initial opposition, Agnew became one of the public faces of the administration,giving numerous speeches as a voice of Nixon’s silent majority. Animosity grew between the two. Agnew’s downfall came in 1973, when he was indicted on tax evasion, fraud, bribery, extortion and conspiracy. He blamed Nixon for bringing the charges into the public as a distraction from the Watergate scandal, and the two men never spoke again.

I just read this story
https://citinewsroom.com/2018/10/08/incompetent-mahama-wants-comeback-to-do-more-damage-bawumia/

Ghana today looks more like a train that is being driven to disaster by an autocratic, incompetent and arrogant driver supported by his equally incompetent assistant who do not care what happens to the passengers they are responsible for. Every single institution of the country is under attack. The temple of democracy is being destroyed by a systematic assault. The President and his Vice came to power on the promise that they will wipe out corruption but they became practitioners, propagators and collaborators in bailing out their debt ridden corporate cronies. The crisis of governance in Ghana under Akufo Addo and Bawumia, marked by Corruption, total economic failure, incompetence, nepotism and spread of social divisiveness, is at its peak. He [Bawumia] should go back and listen to himself when he lied about achievements of his government (Ask Bawumia).

Farmers are being crushed by the huge burden of debt, sharing water with animals, unable to transport their goods due to bad roads while government is happy giving debt and tax waivers to large corporate houses owned by their cronies.

The youth are restless and discontent at the lack of opportunities to earn and live with dignity. The senior minister and cabinet ministers of the administration are now publicly saying there are no jobs. He mentioned creation of ghost jobs in his maiden address. The unemployment rate in Ghana has quadrupled between 2017 and 2018, whereas the number of jobs in the country in the last financial year 2017-18 also fell. Traders including their allies at Abossey Okai are calling on government to scrap some of the newly introduced taxes and measures. These sneaked through policies and taxes have devastated their profit margins, markets, cost of operation, access to working capital, and forced hundreds of businesses to shut their shops. They have destroyed the informal Labour sector and swiped out many businesses, it has led to job losses and has wiped out confidence in Ghana,’s economy.

The Cedi has fallen to its lowest point ever- Ghc 5 to a dollar. Investors are stampeding out of Ghana. Growth is declining.

John Mahama is not an economic guru and has never never claimed to be one. But under his watch as Head of Prof Mills’s economic team, he gave Ghana the most stable macroeconomic climate in the country. All the relevant economic indices at the time pointed to an economy which was on a sounding footing. The inflation which stood at a worrying 18.1 per cent in 2008 dropped to 8.55 percent and was at single digit for many months, longest sustained period of single digit inflation in Ghana’s entire history.

Under Mahama’s watch and supervision as Head of the economic team, interest rate declined. There was a significant reduction in the yield of the 91 day money market instrument from 24.67 percent in 2008 to 9.1 percent in September 2011, which is still the lowest recorded money market rate in decades.

Under Mahama’s watch, the fiscal deficit on cash basis which had skyrocketed in excess of 14.5 percent of the Gross Domestic Product under the Npp which posed a major threat to the stability of the economy at the end of 2008,was brought down to its all time low of two per cent of GDP

The exchange rate was stabilised and that rapid depreciation of the cedi the administration inherited from the Npp administration was halted. Ghana recorded its highest growth rate with provisional estimates showing that the country’s GDP had over grown.

Because of these unprecedented economic achievements made possible by Mahama and his economic team, the IMF board gave its nod for Ghana to access its largest ever single loan deal…this facility was given to the administration to undertake major industrial and infrastructural projects including the Western Gas corridor Gas Infrastructure project, landing sites projects, etc.

All these hallmark achievements were recorded the first two years of the Mills/Mahama administration. Can Bawumia compare his achievements as Head of the economic management team of this government to those John Mahama?’

I also read this story ….
https://mobile.ghanaweb.com/GhanaHomePage/NewsArchive/Mahama-deserves-no-credit-for-fixing-dumsor-Bawumia-420374

Yea, he tacitly admitted that Mahama solved Dumsor. Bawumia displayed gross incompetence here. Ghana’s power crisis was there before Mahama took over. His boss, Mr Kufour, deployed pastors to Akosombo to pray for spiritual intervention. Under Rawlings and Kufour we experienced serious power crisis. Bawumia must be told that the people of Ghana are demanding for change. They will no longer be fooled by his magical train that is headed for a bad accident.

-How many infrastructural projects have you added to what you inherited Including the terminal 3, atuabo gas etc ?

-Is the country attracting substantial foreign investment? – in fact there’s flight of capital at present and very little has tricked into Ghana

-,How many megawatts of power have you added to what you inherited from Mahama- By the way you’ve added zero but your boss is bragging around that Ghana is now a net exporter of Power

-Industrial production continues to be low. There’s very little demand for goods as Ghanaians simply do not have enough disposable income to keep up the demand

-What is the state of the banks?

-Can he tell us Ghana’s current rating in terms of corruption (Transparency International).

-What about your digital addressing system.

-The jobs you claimed have been created by your administration 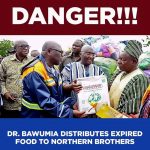