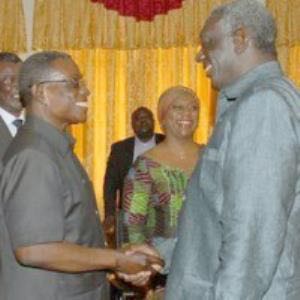 We are happy that the meeting took place at all. There has been a lot of bad blood between President John Evans Atta Mills and his predecessor in the media, over the way the ex-President has been treated, regarding his ex-gratia, an office space and his private home. The subtle attempt to reverse the gains of the Kufuor era has also been a source of worry.

For instance, when the Kufuor Presidency constructed the Jubilee House as a befitting Presidential home and Government House, the incumbent leader has not taken advantage of the many facilities the Jubilee House offers. To add insult to injury, the name was changed in a clandestine manner to Flagstaff House.

Even for a man claiming to be a student of Osagyefo Dr. Kwame Nkrumah, renaming the new Government House as Flagstaff House, to revive the image of the residence of Nkrumah, when he was Head of State, was a bit bizarre. At the time Nkrumah took residency at Flagstaff House, it was a military outpost, so named to reflect its role as the centre where flags were issued to the various divisions constituting the West African Frontier Force, during the British colonial era.

Jubilee House was not the only change in name that might have offended the Kufuor legacy. After the renovation of the Accra and Kumasi sports stadia in readiness for the 2008 African Cup of Nations, the two stadia were renamed after Ohene Djan and Baba Yara respectfully, in recognition of the achievements of the first Director of Sports of Ghana, and a great footballer who lost his life in tragic circumstances. Without recourse to any serious debate, the Ohene Djan Stadium was changed after agitations by a group of activists of the National Democratic Congress and the Ga lobby.

In all these, Mr. Kufuor has remained silent. But, the ex-President could not be happy with the subtle attempts to humiliate him. That is why The Chronicle pats the back of President Atta Mills for asking for a meeting with the ex-President after all these difficulties. We hope the meeting was fruitful, and that serious issues bordering on peace and the country’s security were discussed, and amicable solutions suggested.

We recommend that the President also extent a hand to the presidential candidate of the New Patriotic Party, Nana Addo Dankwa Akufo-Addo, undoubtedly the country’s leader of the opposition, to a similar meeting to discuss their differences, and set the tone for peaceful presidential and parliamentary campaigns, leading to the vote in December 2012.

This country is polarised between the adherents of the ruling party, the National Democratic Congress, and followers of the NPP, the largest opposition political entity in the country.

A meeting between the President and his most serious challenger for the highest office in the land would go a long way to ease tensions in society.

In the interim, we wish the President well. His meeting with the immediate past Head of State of this Republic was in order.