THE ICC NAILED IT WHEN THE HIGHEST COURT OF OUR LAND IS SEEING IT ‘HAZY’ – IN THE MATTER OF MR. ALFRED AGBESI WOYOME’S LEGALLY OBTAINED JUDGMENT DEBT*

The International Chamber of Commerce (ICC) on 3rd August 2017 made a ruling in an application filed by Mr. Alfred Agbesi Woyome for determination in a matter against the Republic of Ghana for *WRONGFULLY* linking him to a contract he is not a party to in order to enable them retrieve from him monies he legally obtained from the Government of Ghana through a competent Court of jurisdiction for *financial engineering services he rendered and was ascertained through the procurement process for the CAN 2008 Tournament, which process was truncated WRONGFULLY on the 22nd August 2005* which had received a concurrent approval from the Central Tender Review Board.

What the judgment by the ICC means is that Mr. Woyome has been vindicated when he consistently stated that he obtained his judgment on the basis of the illegal cancellation of the procurement process of CAN 2008 that took place in *2005*, and *NOT a 2006 contract* Government of Ghana (GoG) signed with Waterville Holdings.

In the year 2010 or thereabout, Mr. Alfred Agbesi Woyome made a claim on the Government of Ghana (GoG) for financial engineering services he rendered during the procurement process for the rehabilitation and construction of Stadia for the CAN 2008 Tournament, which process was illegally truncated by Government on the 22nd August, 2005.

Subsequently, Mr. Woyome instituted a court action against the Republic at the High Court and obtained default judgment against the State on 24th May, 2010, and the Court awarded a total judgment debt amounting to over 105 million Ghana Cedis.

It took the tact and instrumentality of the then Attorney General and Minister of Justice, Mad. Betty Mould-Iddrisu, and the Presidency to get the Minister of Finance to negotiate with Mr. Alfred Agbesi Woyome and his lawyers to agree on a settlement amount of Gh¢ 51.2 million, which was eventually paid in three (3) tranches; the first one paid by Mad. Betty Mould-Iddrisu, *and the other tranches paid by Mr. Martin Alamisi Amidu*.

*NOW THE GRAND AGENDA WITH MARTIN AMIDU AS THE DEVICE: SUPREME COURT*

In June 2012, the ‘peeved and remotely controlled’ Martin Alamisi Amidu instituted an action at the Supreme Court of Ghana against the Attorney General, Waterville Holdings (BVI) Limited, Austro Invest and Mr. Alfred Agbesi Woyome, coming under Articles 2 and 130 respectively of the 1992 Republican Constitution of Ghana.

It was the contention of Martin Alamisi Amidu that the agreement and/or contract of *26th April, 2006* between the Republic of Ghana and Waterville Holdings is an international business or economic transaction under *Article 181(5) of the 1992 Constitution* that could only have become operative and binding on the Government of Ghana after being laid and approved by Parliament.

He argued that the said *2006 contract was not laid before Parliament and did not receive Parliamentary Approval* so was seeking a declaration that the contract having not been laid before Parliament as per Article 181(5) be declared null, void and without operative effect, and so to all other transactions and claims; and an order directed at Waterville Holdings and Mr. Alfred Agbesi Woyome to refund to the Republic of Ghana all sums of money paid to them severally or jointly.

The supreme Court (ordinary bench) sitting on the matter, presided over by His Lordship Samuel Date-Bah (JSC) in his judgment on the 14th June, 2013 made the following ruling:

(a) The Stadia Contracts entered into between the Government of Ghana and Waterville Holdings were void ab initio as same contravene the provisions of the 1992 Constitution of Ghana, under Article 181(5), and accordingly ordered Waterville Holdings to refund monies to the State.

(b) That it is Mr. Woyome’s argument and/or case that he was *not party to the Stadia Contracts*. And that “if payments have been made to the 2nd and 3rd Defendants under agreements other the two *dated 26th April 2006*, which were terminated, issues relating to those payments would have to be determined in a forum other than this Court (Supreme Court) and in a different action, since they do not come within the issue of constitutional interpretation raised by the Plaintiff’s writ”.

(c) And also for *submissions based on the assertion that Mr. Woyome had no contract with the Government of Ghana* and therefore had no valid claims against the Government be determined by the High Court, and not by this Court (the Supreme Court), since they do not involve, according to the relevant case law, the interpretation and enforcement of the Constitution and do not therefore fall within the ambit of the Court’s original jurisdiction under Article 130(1) of the 1992 Constitution.

(d) The Court was of the opinion that the merits or demerits of the case for and against Mr. Woyome should be decided at the trial then pending before the High Court.

The ordinary bench unanimously ruled that the proper forum for the determination and resolution of whether or not Mr. Woyome is entitled to a claim against the State is the High Court and not the Supreme Court.

The ruling by the ordinary bench of the Supreme Court led by His Lordship Samuel Date-Bah (JSC) is legally perfect, reasonable, fair, and fit the historic ruling of the International Chamber of Commerce (ICC) which is constant and consistent with Mr. Alfred Agbesi Woyome’s position that he is not a beneficiary and/or a party to any contract signed in 2006 between the Government of Ghana and Waterville.

His Lordship Samuel Date-Bah two weeks after delivering his judgment as the presiding Judge on the ordinary bench went on retirement.

*Watch out for Part 2 to get very distressing revelations about the conspiracies; Martin Amidu going on review; the shameful review judgment and the prejudicial comments; the blatant disregard and violation of Mr. Alfred Agbesi Woyome’s human rights, and rights to fair trial, equality before the law and impartial tribunal, etc*.

*GOD RULES IN THE AFFAIRS OF MEN*.

Writing as a Citizen and not a Spectator. 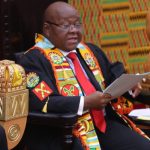