According to him, though the NPP won convincingly in the 2016 polls, they would have done better had it not been for the intimidations by the NDC which prevented some of its supporters from voting.

Since there would be no such intimidation in 2020, he the playing field will be levelled and when these supporters join others to vote, “NDC will see their smoothness level”.

“We will trim them to size and they won’t even get 70 seats in parliament”, he maintained.

The party also wrestled close to 50 parliamentary seats to gain the most comfortable parliamentary majority since the second parliament of the Fourth Republic.

The defeat, the worst ever to be suffered a ruling government has left the NDC reeling with a committee set up to investigate the defeat to possibly proffer solutions for a quick return to power.

But speaking on Asempa FM’s Ekosii Sen on Wednesday, the NPP Deputy General Secretary stated that the NDC should forget about winning power in 2020 because their defeat will be worse.

“There were some irregularities that is why the NDC got what they got. They will know their real size in 2020”, he said.

According to him, “the NDC can choose to bring President Mahama or Paa Kwesi Amissah-Arthur but they will still lose woefully”. 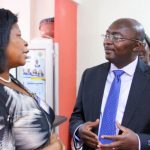