President Nana Addo Dankwa Akufo-Addo has assured Ghanaians that the teething problems of the Free Senior High School programme would be adequately handled to bring out the benefits to all Ghanaians.

Optimistic of the success of the programme, the President thanked all stakeholders for how far the programme had gone assuring Ghanaians that it would certainly work to the admiration of all.

“I am determined that the policy of free Senior High School will continue and continue and continue…so that all our children would always have the opportunity to go to school,” the President said attracting an appreciating applause of a delegation from the Bawku traditional Area led by the Bawku Naaba, Asigri Abugrago Azorka II who called on him at the Flagstaff House in Accra.

The delegation were at the Presidency to reciprocate the president’s pre and post-election visit to the traditional area.

“If we had kept to the old system, in another five years we would have had about one million youth who stopped their school at the Junior High School. But in today’s world junior high school education is not enough…we have to speak the truth to each other as Ghanaians, we have to make sure that everybody gets at least to secondary school,” he said.

“This year to show you the impact of the policy, 90,000 more students are in Senior High School this year than there were last year…I want to make sure that everybody that is eligible finds themselves in secondary schools.”

The President acknowledged that in every new endeavor, there are bound to be challenges, citing the logistics, infrastructure and resource constraints since the take-off of the Free Senior High School programme, but was thankful that the programme did take off.

“The Chinese have a proverb that says that a journey of a thousand miles starts with a step…so we have taken the first step. The issues about infrastructure, class rooms, logistics, we are going to deal with those…but we can only deal with them because we have started,” he said.

“So I want the support of traditional rulers for the programme to continue but the problems would be resolved.” 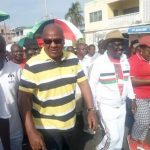