Ahead of the New Patriotic Party’s (NPP) extraordinary national delegates’ conference on Saturday in Sunyani, the Brong Ahafo Regional Chairman of the party, Kwaku Asomah-Cheremeh, is warning that the party will not tolerate any unrest at the conference grounds.

Saturday’s conference will see the unveiling of the campaign team for the party’s 2016 Presidential Candidate, Nana Addo Dankwa Akufo-Addo, following its endorsement by the National Executive Committee and National Council of the party.

In an interview with Citi News, Mr. Asomah-Cheremeh said they were picking up signals that some non-party members are planning to disrupt affairs on the grounds.

“There are some people who may came in our party politics with the intention to demonstrate to the whole world that they are also members of the party and the they are coming to demonstrate against the progress we are making.”

Mr. Asomah-Cheremeh said there will be ample police presence on the ground to curb unrest and ensure that no offensive material is smuggled into the delegate’s conference.

“They[the police] have given their words that they are coming to protect lives. We as party members are also going to cooperate with the police.”

He added that the police will be on hand to ensure security at the event and prevent any disruption, saying only delegates will have access to the grounds.

“Accreditation is given to only delegates so those who have in mind to come and disrupt it will not get the opportunity to enter.”

The Public Relations Officer of the Brong Ahafo regional police command, ASP Christopher Tawiah, also reiterated the commitment of the police to security at the delegate’s conference, adding the command will deploy over 300 personnel to ensure that law and order is maintained.

“We have mobilized our men from all the districts and all the divisions and the total number as we speak now is 386,” he said.

The NPP’s extraordinary national delegates’ conference comes after major shake-up within the rank and file of the party that has seen the suspension of Chairman Paul Afoko, General Secretary Kwabena Agyepong and Second Vice Chairman, Sammy Crabbe. 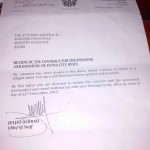