According to the chairman of the Council of Elders C.K Tedam, Afoko’s actions and inactions were leading the Danquah-Busia-Dombo tradition into disarray hence his suspension.

He alleged that Afoko was unwilling to call meetings at the party’s headquarters and only directed executives and officials to come to his office or hotels to deliberate on party issues under “semi-military” guard.

“We called regional chairmen for meetings at the headquarters and he said we should come to his office at Osu,” Tedam told the media, Monday.

“He called meetings at hotels and he’ll bring all sort of people like semi-military personnel to surround the place. We didn’t feel we were part of the party and we were like prisoners being called together by the chairman…He wasn’t calling meetings at the right time. We have been suffering for too much.”

Going into the genesis of the suspension, he opined: “Having observed the way things were going, we were going into disaster so we petitioned to the Disciplinary Committee.

“…We’ve been asking him [Paul Afoko] to be in his own judgment because of that, we sent it to the right place; the disciplinary committee. They intend invited Paul Afoko just like the Council of Elders invited him and he refused. I went to talk to him myself, he refused to come. We wrote to him officially so that he will reply officially because our idea is to bring peace and harmony to the party.”

“As fathers and mothers of the party, it was not our intention to impeach him because we thought that will take time and it will disorganize the party a little so we asked him to come and explain why he is not cooperating.

Tedam added: “We believe that the only way we can handle this matter is to let the Disciplinary Committee take it upon themselves because he can’t be judged in his own case and we only asked that he should be disciplined and should be asked to wait until things are put in shape. We planned to bring peace, but Chairman Afoko would not just cooperate.” 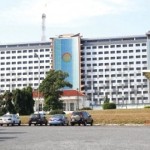