The $275 million which will be disbursed to all constituencies across the country is ready, Minister for Special Initiatives, Hon. Mavis Hawa Koomson has disclosed.

According to the Minister, 70 percent of the $1 million dollars for each constituency, will be spent on government’s priority projects such as the “One district-one factory, one village one dam, warehouses for planting for food and jobs among others.

The remaining 30 percent will be used for the priority constituency needs, which will be determined by a 10-member team approved by Cabinet, she explained.

Speaking at an event organised by her Ministry to brief MMDCES on government’s priority areas on the Infrastructure Poverty Eradication Programme (IPEP), she said, ‘’ “that is where we want the MPs, the MMDCEs and the stakeholders to come together and come out with a plan so that they can get a project for the needs of the constituency and then implement them.”

“The President has realized that if we want to wait until the authorities are implemented before we can do these development initiatives, it will be very difficult for us; so he says we should put in place a provisional measure so we can do the implementation this year. That is why we are coming out with the 10-member team.” 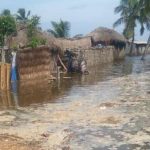