He said, he was one of the people who had absolute confidence in the current administration and was hopeful it was going to bring significant changes in the health sector but has been left highly disappointed by this government. He said, breach of promise is very expensive not only in terms of voters’ confidence but in terms of God’s holding them (Npp) I’ll considered lies. He told the host that, looking at happenings in the health sector currently, the Mahama administration stands vindicated and must be commended for some of the tough but prudent policies it introduced which were vehemently opposed by the nursing trainees. He said the restoration of trainee allowance by the Akufo-Addo government was a bad decision. He said, Ghana is the only country on the continent paying allowance to trainees. The President of UNSAG said, his group will challenge government on its decision to introduce the quota system. He said government must go back to the policies of the previous administration of building more hospitals to absorb newly trained nurses, introduce the loan scheme to reduce pressure on the national Kitty and build more nursing training institutions

UNSAG, in 2016, organised a news conference in Accra to draw the Mahama administration’s attention to what it described as plight of graduate nurses, unemployment and lack of requisite logistics to facilitate teaching and learning. But speaking on the show, Mr Colins Agyarkwa said, the policies introduced by the last administration, are far more better than they witnessing under this government. 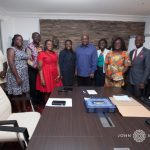