In response to a challenge by 2016 NPP flagbearer- Nana Akufo-Addo- to the government to name a single social government intervention it has introduced, Koku Anyidoho says the provision of water is a key example.

“Water is life… what is more, of a social intervention if I put money in your pocket and you can’t buy water?” Deputy National Democratic Congress (NDC) General Secretary, Koku Anyidoho pointed out on Joy News Monday.

At the NPP’s version of the State of the Nation Address held in Accra Monday, the main opposition leader lampooned government for glorifying itself based on the initiatives of the former NPP administration.

Buoyed by the NPP’s record, Nana challenged the NDC government.

“The Social Democrats of the National Democratic Congress should tell us what social intervention programmes have they successfully launched after almost 8 years in office? The answer is a big zero”.

He said under the NDC government, social intervention programmes have been suffering.

“Unfortunately, all these policies, which he subsequently embraced, have been badly managed. I have to conclude that the NHIS is suffering a similar fate. The President announced some impressive numbers as those who now subscribe to the NHIS”.

“The reality is that the service is in deep distress and we now have a two-tier health service, where the NHIS users are the second tier and the dreaded cash and carry is in operation as the first tier at many health facilities”.

“The other social interventions have suffered similar fates. The NYEP has been transformed of into a vehicle of corruption through GYEEDA. The Capitation Grant is in arrears. The School Feeding Programme is in arrears. Free Maternal Care under the NHIS is no more. The Metro Mass Transit, through rebranding, has become another avenue for corruption”.

But Deputy General Secretary says the NPP while in office between 2001 and 2008 failed to provide water in the opposition leader’s hometown – Kyebi.

“Water is life. Is Akufo-Addo saying that there is no water in Kyebi….Kwabeng? 12 years as MP, 8 years as Cabinet minister was he able to send water to Kyebi, Kwabeng and its environs?” Koku defended government.

President John Mahama has been proud of government’s effort in improving access to portable water. He dedicated parts of his State of the Nation Address in Parliament to tout government’s achievement in the water sector.

“Since my last appearance before this august House, a total of 77.5 million gallons of water per day has been added to the national water production stock following the coming on stream of such water projects as the:

Nsawam, Essakyir Five Towns, Mampong, Barekese, and other Small Town Water Projects.The effect of this intervention is that out of the 10 million or so Ghanaians who were deprived of water, 4 million of them living in hundreds of communities currently have been given access to safe drinking water.

There are many more water projects dotted around the country, which is nearing completion. These include the: Akim Oda- Akwatia- Winneba, Konongo-Kumawu-Kwahu, Wa, North Tongu, Adaklu Anyigbe, and scores of urban and peri-urban Small Water Projects.

The completion of these projects will increase water coverage for our people to about 85%, which translates into 7 million out of the 10 million that were left behind as at 2009. These are not just statistics.” 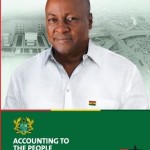