The Wa Municipal Assembly in the Upper West Region, has now found it prudent to construct desks for pupils of the Kperisi Primary School in the area, who have been learning on bare floors for months.

The assembly’s intervention, comes few days after the Vice Presidential Candidate of the opposition New Patriotic Party (NPP), Dr. Mahamoud Bawumia, ordered 500 desks to be made for them.

The school’s plight, came to light after the State of the Nation Address last Thursday, where the President had boasted of massive achievements in the educational sector.

Harrowing pictures of children lying on the bare floor but showing determination to learn, were awash on social media and some news portals, drawing the attention of Dr. Mahamoud Bawumia, who was on a visit in the region, to pass by the school.

He interacted with the kids, and immediately ordered for 500 desks to be made for them.

But in what appears to be a face-saving exercise, the Wa Municipal Assembly, which is reportedly unhappy with the school’s Headmistress for allowing the plight of the school to be publicized, has hurriedly started the construction of some 200 desks for the school.

Citi News’ Latif Mahama who confirmed this, says he encountered a contractor from the Assembly working on some desks over the weekend for the pupils.

Speaking to Citi News, Spokesperson for the Wa Municpal Chief Executive, Issahaku Nuhu Putiaha, claimed that the Assembly had made plans for the construction of the desks long before Dr. Bawumia’s intervention.

“There was vacuum to be filled or a need that was already being addressed by the Assembly. We contracted somebody to supply furniture and the deadlines were just by the close of the month. Luckily, that has happened within this spate of time that the media followed on the story, the assembly has also delivered on its promise,” he added.

The spokesperson was also of the view that the media would have been aware of plans to address the plight of the pupils if they had done proper checks.

“From my perspective, if due diligence was really done, one would have gotten to know that steps were far advanced to provide the school with furniture and other needs.”

Meanwhile Citi News can confirm that the MCE and the Kperisi community will be addressing the media this morning on the matter.

Headmistress being victimized by assembly?

Following the publicity given to the plight of the school, there are reports suggesting that the District Assembly is unhappy with her and has asked her to render an apology.

In their view, the headmistress’ lamentation about the school’s plight seeks to portray the government in a negative light especially when it comes barely after the President touted several achievements in the education sector at last Thursday’s state of the nation address. 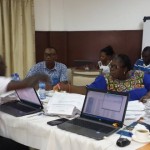