The man who allegedly killed a Marketing Officer of Vodafone Ghana, Ebo Quainoo is in the grips of the Police.

Eighteen year old, Abdul Razak Ibrahim, was part of the robbery operation last month in Sakumono, in Accra, which led to Ebo’s death.

They shot and killed him, leaving behind his pregnant wife.

One other suspected accomplice is currently on the run. Addressing the press today [Tuesday], the Accra Regional Police Commander COP Dr. George Akuffo Dampare however gave the assurance the police will close in on him [suspect]. “… we’ve been able to arrest one of the two individuals who did this to our brother and the family.

In the course of the arrest, some of the items that were stolen have been sold to a couple of people and under the circumstance, five other individuals who were involved in the sale of those items have also been arrested.”

“The name of the individual is Abdul Razak Ibrahim, an 18- year-old resident of Ashaiman, a surburb of Tema and we are in the process of arresting him. We have sufficient information and we are putting all resources to get him arrested,” he revealed.

Quainoo was shot dead by two unidentified armed robbers at his residence at Sakumono, near Jotasa Pharmacy, in the Greater Accra Region last month [November]. 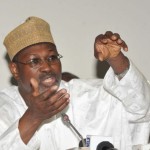