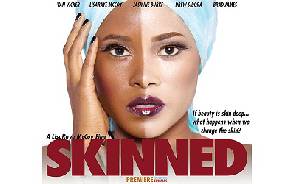 As hinted by the title, the film deals with colorism within the black community, and centres around a young woman named Jolie, “whose insecurities about her skin colour, misconception about beauty, and search for romance causes her to bleach her skin beyond recognition in an attempt to capture the heart of the perfect suitor, leads to the detriment of her health.”

However the story just doesn’t end there, and takes a more melodramatic turn when it “fast forwards to 15 years later, with Jolie (played by jasmine Burke) now a…model with a wonderful husband, but discovers she cannot conceive due to certain chemicals found in skin bleaching creams.

To make matters worse, she has skin cancer and has 6 months to live. Now, with the assistance of a psychiatrist, Jolie must go on a journey into her past to face her demons.”

“Skinned” is a motion picture that tackles skin bleaching not only in the movie but portrays an epidemic with hopes to change lives on a global scale.

The movie also seeks to educate and send a message to young girls that are thinking about bleaching and those that follow the trends of known celebrities who have bleached; it hopes to steer in a different direction.

Vicker features in ‘Skinned’, A movie that tackles bleaching