Four young girls from the Ketu South District in the Volta region, through an initiatives into reading between Soar Global Foundation, Bit-Brain Foundation and Values For Life Ghana (VFL-Ghana), have had a day’s trip of what they describe as an unforgettable memorable day in Accra, Ghana’s capital city.

They are Esther Agadze, Akos Mensah, Emmanuella Akoetey, and Jennifer Hamenu.
The girls were in Accra as part of their winning package for emerging winners of an essay writing competition as well as a reading competition organized by VFL-Ghana in the Ketu South District for pupils from selected public schools.

VFL-Ghana, a non-governmental organization, has since 2012, been organizing reading clinics and writing competitions for pupils of public schools in the District, with an aim of sharpening their reading and writing skills, through competitive yet fun exercises and activities.

Participants over the years have benefited from such rewards as scholarships, trips abroad, text and story-books, study trips to Accra and to Ho, among many others.

Led by Chief Executive Officer for VFL-Ghana, Abla Dzifa Gomashie, the girls visited the Accra Regional Hospital (Ridge Hospital), and then to the Alisa Hotel where Ms. Gomashie, a member of the Board of Makeup Ghana, was speaking at its 2019 Fair.

At the Fair, the children were introduced to the audience and then also got to have interactions with a few of the dignitaries gathered there, alike participants.

Following that, they went to the National Theater where they met iconic screen players, Edinam Atachi, and Mawuli Semevo, and also, the former executive director of the National Theatre, Korkor Amartefio. Fortunately too for them, at the time of their visit, a rehearsals session was ongoing for a music concert being sponsored by the Israeli Embassy in Ghana, of which they sat through for a moment.

Their next stop was at the Sports Complex, where the girls met one of the celebrated names in sports reporting in Ghana and Africa, Rosalind Amoh, who encouraged them to keep on aiming for gold throughout their lives.

Although the Parliament of Ghana is on recess, the girls had the opportunity to walk through the House and take pictures, after having briefly passed by the Independence Square.

Already swelled up with excitement from all they had encountered so far, their next stop was the Children’s Park in Accra where they saw a rollercoaster and had the chance to again, take some pictures.

And then a more exciting happened with these girls: they had a well-guided tour of the TV3 offices in Accra, getting to meet many of the faces they hitherto only saw on screens from their homes, received words of advices from them, took photos before finally rounding up to return home.

In the words of Dzifa Gomashie, such exposures for young pupils like these “helps to expand their scopes of appreciation and understanding of things in life. These trips also help them aim at the zeniths of life, being conscious of only moving forward, and never behind.”

She was particularly grateful to all the organizations and individuals who have over the years, supported VFL-Ghana to be able to successfully undertake these projects that have seen an improvement in the lives of these school-going children, preparing them to become more responsible leaders in future. 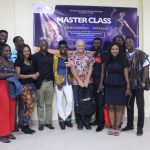